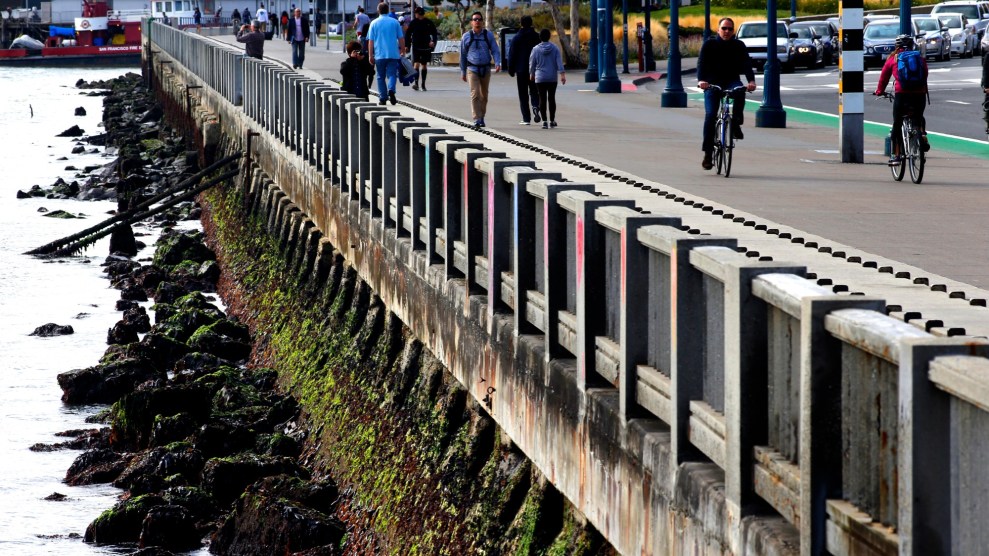 Think back to being a kid at the beach, building walls around your sandcastles. If you engineered those fortifications properly, the tide would come in and flow around your kingdom, before the walls eventually eroded away. By redirecting the rising water, you would have saved your castle—at least for a little while.

Now think bigger. Imagine you’re a city planner in an area threatened by rising seas and you’ve spent a fortune to build a proper seawall. The tide comes in and the wall holds, saving you billions of dollars in property damage. But: whomp whomp. Like the waves you once redirected around your sandcastle, the rising waters hit the wall and flow into the communities on either side of you. You’ve saved your residents, but imperiled others.

New modeling shows just how catastrophic this wayward-water phenomenon might be in the San Francisco Bay Area, where sea levels could rise 7 feet in the next 80 years. “Those rising waters put millions of people and billions of dollars in buildings at risk,” says Anne Guerry, chief strategy officer and lead scientist at Stanford University’s Natural Capital Project, who coauthored a paper describing the research. It was published this week in the journal Proceedings of the National Academy of Sciences. “One of the things that’s new about this work is that people haven’t necessarily thought about how communities, like in the Bay Area, are connected to one another through these shared waters,” she continues.

Guerry and her colleagues did the modeling by breaking up the shoreline into sections, based on characteristics like geology. Then they used hydrological models to show where the rising water would go if a given section of coastline was fortified with a seawall. Basically, they imagined what would happen if the residents of one area decided to protect themselves without fully considering the resulting hydrology. “That water has to flow somewhere,” says Guerry. “And what we found is it ends up flowing into other communities, making their flooding much worse.”

“That water has to flow somewhere, and what we found is it ends up flowing into other communities, making their flooding much worse.”

They also incorporated economic modeling to calculate how much damage this would do. For example, they estimated that if the local government was to throw up a wall around San Jose, a city in the South Bay, it would inundate other communities with the equivalent of 14,400 Olympic-size pools’ worth of redirected waters. San Jose would be saved, but nearby Redwood City and other communities would be screwed. “That equates to $723 million of additional flood damage costs after just one high tide during spring, when the waters are naturally highest,” says Guerry. “And that’s just from building one large seawall in one small part of the bay.” And that $700 million-plus figure doesn’t account for potential damage to ecosystems and fisheries, so the tally is a conservative one.

The extra water pushed back by San Jose’s wall would even accumulate clear across the bay, in Napa and Sonoma, 50 miles north. The damage would go the other way too: If the Napa and Sonoma coasts were walled off, the South Bay would see tens of millions of dollars in damages.

That’s not great news, considering that humans have a habit of building big cities on coasts, which urban planners now have to fortify, and seawalls are often the best defense available. The authors of this paper note that by the year 2100, the US alone is predicted to spend $300 billion on buttressing shorelines to hold back both sea-level rise and the bigger surges that come with storms made more powerful by climate change. Lawmakers must soon consider whether to spend $26 billion to wall off the area around Houston. Jakarta, too, needs to build a giant seawall, only it can’t until the land underneath it stops sinking.

Up to this point, policymakers have assumed that seawalls might negatively affect nearby communities, but this new research puts numbers on the potential harm, says Laura Feinstein, sustainability and resilience policy director at SPUR, a nonprofit public policy group in the Bay Area. (She wasn’t involved in the research.) “It’s a really quantitative and rigorous demonstration of something that people have always said of sea-level rise, which is that regions either sink or swim together,” she says. “If one area pours resources into armoring its shoreline, that’s just going to exacerbate sea level rise for its neighbors.”

But getting local governments to act in concert may be a challenge, especially if they don’t all have the same financial resources or some are under particular pressure from lucrative local industries that would really rather not be underwater. The temptation for a county with a healthy tax base (read: one that’s full of rich people) will be to unilaterally build a seawall, low-income neighbors be damned.

“If one area pours resources into armoring its shoreline, that’s just going to exacerbate sea level rise for its neighbors.”

In the Bay Area, where income inequality is profound (the gap between average high and low incomes is $263,000, compared to $178,000 nationwide), the scene is primed for disaster. “Communities of color and low-income communities have been pushed into low-lying areas in the Bay Area for decades,” says Feinstein, referring to shoreline neighborhoods in cities like Oakland and East Palo Alto. Many of these areas have also historically been home to manufacturing, warehousing, and the shipping and rail industries. “You have this colocation of old toxic waste sites, heavy industry, and transportation, and then low-income communities of color, all being most vulnerable to sea-level rise in the Bay Area,” she says. When waters rise, they could push up groundwater contaminated with these buried toxins; these areas will not only flood, but they may do so with polluted water.

The Bay Area has a few seawalls already in progress. The Port of San Francisco is upgrading its century-old Embarcadero Seawall, and the US Army Corps of Engineers is studying ways to bolster the San Francisco International Airport’s levees. Foster City, to the south, is building a new levee that will stretch more than 6 miles, and the wastewater district in North Richmond, on the other side of the bay, is considering its own levee project.

At the moment, local governments don’t have to work together to consider the unintended consequences of future seawalls. “That’s primarily because there’s no formal mechanism to require people to do that,” says Dana Brechwald, manager of the Adapting to Rising Tides program at the San Francisco Bay Conservation and Development Commission, who wasn’t involved in this new research. (She’s also program manager of Bay Adapt, a regional collaboration that advocates for protecting people and ecosystems from rising seas.) “If someone were to do that at a local level, it would be completely voluntary.”

But by putting numbers on how bad the flooding could get if seawalls are erected haphazardly or without cooperation, the new modeling may encourage more collaboration between neighbors. “We’re really hoping to set that sort of stuff up in the future,” Brechwald adds. “Those mechanisms are going to be really critical to make sure that we have equitable adaptation.”

And it might also make planners consider alternatives to walls. Nature actually has another solution ready to go: using the landscape to our advantage. (Climate scientists call this a nature-based solution because it leverages natural processes instead of trying to engineer our way out of a problem.)

Certain stretches of coastlines naturally take up seawater better than others—alluvial valleys, for example, the floodplains where rivers meet the sea. These have sandy, muddy bottoms, which soak up water like sponges, especially when compared to rocky shorelines. Guerry argues that instead of walling these off, we should route water toward them, so they can act as overflow areas. “Sometimes it’s more practical and more economical to strategically choose areas that can absorb the water,” she says. “These can be things like marshes and ponds, but they can also be parks and golf courses or other kinds of semi-natural areas, where intermittent flooding is going to cause less damage.”

“Seawalls aren’t the only answer to combating sea-level rise,” Guerry adds, “even though that’s kind of the traditional go-to solution.”