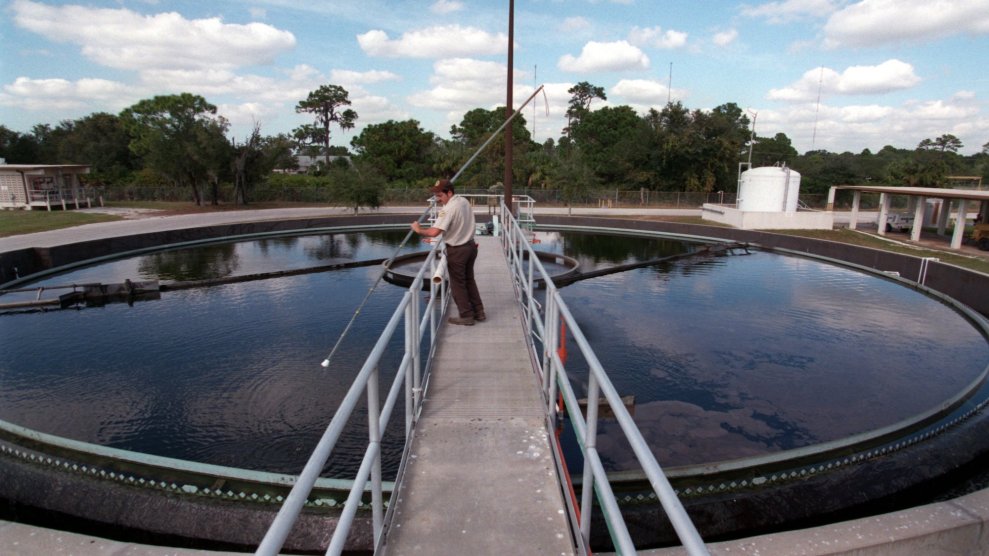 Last week, the Tampa Bay water utility announced a rather bizarre side effect of Florida’s out-of-control COVID surge: It wasn’t getting enough deliveries of liquid oxygen to treat its water. More than 17,000 COVID patients—who require supplemental oxygen to stay alive—are now hospitalized across the state, and there isn’t enough oxygen to go around.

Even with vaccines widely available, the pandemic is worse than it’s ever been in Florida. The state is averaging over 20,000 cases and over 200 deaths a day, putting an incredible strain on its hospital system. Just over half of Florida’s total population is fully vaccinated.

“What we know is that the lack of liquid oxygen is due to a driver shortage and the need for available supplies to be diverted to local hospitals due to the COVID-19 pandemic,” says Brandon Moore, spokesperson for Tampa Bay Water. (Requests for comment sent to Matheson Tri-Gas, their oxygen supplier, were not immediately returned.) This comes a week after Orlando’s mayor asked residents to limit water use for the same reason.

Add water problems to the growing list of consequences of a pandemic that’s now primarily hospitalizing the unvaccinated. That means less space and resources for non-COVID patients who show up in the ER, and now less oxygen for the systems that provide clean water to Floridians.

The oxygen gets converted to ozone, which kills bacteria and viruses, and breaks down hydrogen sulfide, which smells like rotten eggs.

But why do you need even more oxygen in your H2O? Tampa Bay Water trucks in liquid oxygen, which it converts to gas, and then adds a spark of electricity to convert it to ozone. This is used in two separate facilities for two separate purposes, says Moore: At a surface-water treatment plant, the ozone kills nasties like bacteria and viruses, and at a different plant it breaks down hydrogen sulfide, a naturally occurring gas that smells like rotten eggs.

The utility needs a whole lot of liquid oxygen—seven to nine tanker truckloads of it a week, between the two facilities—both to disinfect water and ensure that it doesn’t come out of taps smelling like holy hell. “Liquid oxygen converted to ozone is one of the most powerful—if not the most powerful—disinfectant in the water industry,” says Moore.

Tampa Bay Water’s liquid oxygen supply has been reduced by about half, Moore says. So they’re diverting the oxygen they’ve got to the treatment plant to sufficiently disinfect the water, since they can’t alter that process. They can, however, substitute sodium hypochlorite, also known as bleach, for ozone at the plant that gets rid of the hydrogen sulfide. But given the crunch, the utility is asking customers to cut back on water use, like watering lawns and washing cars. “In this scenario, the less water needed for demand means less water to treat,” says Moore. But, he adds, “it’s very important that residents know that the quality of the drinking water remains safe.”

At the same time, it’s very important that COVID patients get the supplemental oxygen they need. COVID-19 brutalizes the lungs, interfering with the transfer of oxygen from the air into the bloodstream, which is needed to keep the heart, brain, and other vital organs working properly. The target oxygen saturation for the blood is above 92 percent—get below 90 percent and you start feeling shortness of breath. (At the hospital, they measure this by slipping a device called a pulse oximeter over a patient’s finger, which fires beams of light to noninvasively measure the oxygen in their blood.) Once saturation drops below 90 percent, doctors should put a COVID-19 patient on supplemental oxygen, advises the Centers for Disease Control.

But if only it were that simple with COVID, which plays a nasty trick on the human body. “Getting decreased oxygenation because of lung injury is not surprising,” says Nona Sotoodehnia, a cardiologist at the University of Washington School of Medicine. “What is surprising in COVID is the degree to which people aren’t uncomfortable with this critically low oxygen they have.”

A rise in unvaccinated young people showing up to hospitals with COVID has increased the need for oxygen.

Sotoodehnia’s research shows that just 10 percent of COVID patients presenting to the emergency room experience shortness of breath. They aren’t necessarily asymptomatic—other problems like fatigue, fever, and coughing cause them to seek help. But without shortness of breath, these patients had no way of knowing that their blood oxygen levels may have actually plummeted. In other words, they likely needed to be on supplemental oxygen long before they showed up at a hospital.

“If you’re coming into the hospital with a critically low oxygen saturation of 70 percent, you have missed a huge opportunity to start life-saving treatment early,” says Sotoodehnia. “And so that’s the key difference between COVID-19 and other lung pathologies.” Scientists still aren’t sure why COVID has this effect; one hypothesis is that while the virus clearly damages the lungs, it may not decrease the compliance of the organ, or the ability of the lungs to pump air, so some people don’t get that sense that they’re having trouble breathing.

Another key factor in Florida’s oxygen shortage may be the demographics of who the new surge is affecting most: younger people. “Compared to prior waves of COVID-19, this surge has led to hospitalizations of a greater proportion of younger individuals, partly because more older individuals are vaccinated,” says Sotoodehnia. “Younger patients in general have better survival than older ones, so they stay on the ventilator longer in hopes of making it. This means greater oxygen utilization by patients and greater need for oxygen for hospitals.”

There is a sliver of good news: The use of ozone to treat water is much less common in the US than it is in Europe, so the troubles in Florida may (hopefully) be isolated incidents. “In the US, chlorine is more commonly used for disinfection than ozone, and chlorine does not require pure O2,” says David Sedlak, director of the Berkeley Water Center at the University of California, Berkeley.

The frustrating news, though, is that the oxygen shortage in Florida was entirely preventable. If everyone gets their shot, you can keep watering your lawn.