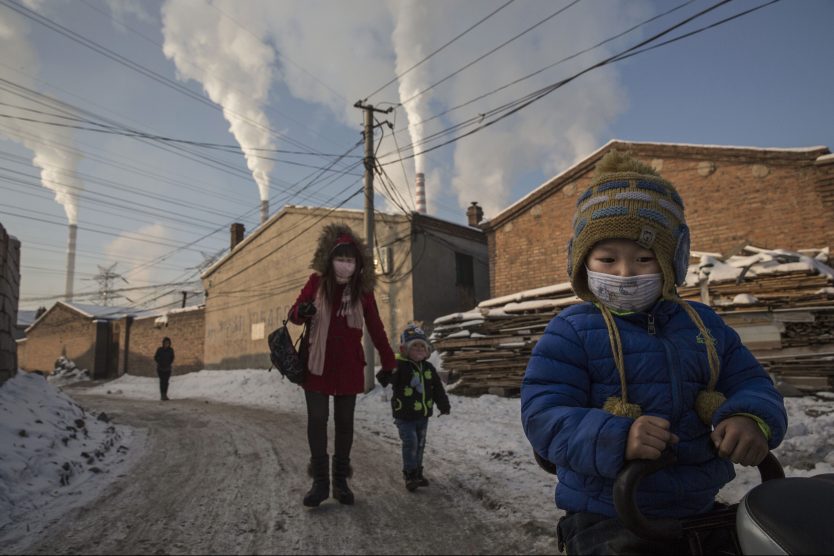 When he was a little boy in the 1980s, Wang Xiaojun was taught to be proud of his home town of Lüliang in the north-western Chinese province of Shanxi. Shanxi is China’s biggest coal-producing region, and Lüliang was a significant base for the army during the second world war.

Nestled in the mountains of the dusty Loess Plateau, Lüliang, a city of 3.4 million people, has had less to shout about in recent years. A series of corruption scandals in the city brought down several high profile officials shortly after President Xi Jinping came to power in 2013; there are concerns over the high number of babies born with congenital defects, blamed by experts on air pollution; and, last week, a huge flood forced coal mines to close just as China scrambles to tackle its energy crunch.

Coal is the main source of power generation in China, but Xi has vowed to change that. The country has been the world’s biggest producer of greenhouse gas emissions for more than a decade now. A year ago, Xi pledged his country’s carbon emissions would peak by 2030, then achieve carbon neutrality by 2060. Last month, he announced China would stop building new coal-fired projects overseas in a move that analysts say could be pivotal in tackling global emissions.

The country has been the world’s biggest producer of greenhouse gas emissions for more than a decade now.

Ending a dependency on coal at home has proved trickier. Shortly after he took office, Xi began to plan on low-carbon and sustainable development of “resource-based cities.” But since September, China has been experiencing its own coal dilemma, with power shortages spread across key regions, causing a ripple effect to the global economy. To tackle the crisis, officials ordered more than 70 mines in Inner Mongolia to increase coal production by almost 100 million tons early this month. And on 29 September Shanxi promised to supply coal to 14 other regions across China to ensure sufficient energy throughout this winter.

Outside China, there is a fear that Beijing may be rethinking its promises on decarbonization. That mood darkened last week, when it emerged that Xi would not be attending Cop26 in person. It is a worry that some veteran China analysts dismiss as over-interpretation—Xi has not left the country since January 2020 and was always unlikely to make an exception for Cop26, particularly as it is being hosted by a western nation.

They argue that Beijing’s recent whac-a-mole approach merely reflects the messy reality of the country’s energy transition. To residents in Shanxi, however, China’s reliance on dirty coal is a vicious circle that the province of 37 million people can not easily pull itself out of, despite the promises from central government. “It is not about whether China can be less reliant on coal eventually, it is rather about what will happen to a province like ours afterwards,” Wang, who now works as a climate campaigner, told the Observer.

“I grew up only knowing the sky is grey and coal is the only source of energy. But I also worry what will happen to a province whose economy overwhelmingly depends on coal and heavy industries”

“As an activist, of course I’d like to see my home town move away from coal. After all, I grew up only knowing the sky is grey and coal is the only source of energy. But I also worry what will happen to a province whose economy overwhelmingly depends on coal and heavy industries, and the millions of people whose livelihoods are reliant on them.”

In Lüliang, villages like Wang’s are often built atop barren mountains to avoid constant floods. Until the 1980s, most of the boys would grow up to become farmers. Then coal became a valuable commodity as China began to expand its economy. But a few years ago, as coal depleted underneath some mountains, many villages collapsed and people died. Those who survived moved away. In Wang’s old village, only three elderly people are still there, he said. “They are reluctant to move. It’s where they spent most of their lives.”

Growing up with coal miners in the village, Wang saw with his own eyes how dangerous mines could be. Seven years ago, when working in a coal mine, Wang’s 38-year-old cousin, Wang Xiaobing, was caught in an accident. A ceiling collapsed and he lost his lower left leg. He was sent home after the incident. But, with a young family to support and lacking the skills to switch career, Xiaobing eventually went back to his former mine as a driver. Shortly after, he developed lung and liver illness and died two years ago.

“You see, the addiction to coal is not just on a national level, but also on a personal level. It’s not easy to move away from,” Wang said. “A lot of people here, including another relative of mine, are unhappy with [media] talk of climate change and the [the government’s] effort to reduce coal consumption. To us, this is bread and butter. Without it, what would Lüliang look like?”

“They need to start to prepare for a coal-free future right now before it’s too late.”

Stories like this have been commonplace across China’s coal regions in the past two decades. In the decade between 2000 and 2010, on average 4,870 people died in mine accidents every year. In the US, the figure was only 33. The figure began to decrease dramatically in the last decade as the government imposed strict safety rules for mine owners and nationalized many mines.

Han Jinsong (not his real name), a 50-year-old former coal miner in the city of Fengyang, said that while also working as a miner, his elder brother was hit by a mine car and stayed in hospital for about six months. “He became disabled and the coal mine he worked at compensated for once,” he said. “That’s it.”

“The addiction to coal is not just on a national level, but also on a personal level. It’s not easy to move away from.”

Han added: “Despite all these tragedies, it’s unrealistic for China to move away from coal. You’ve seen the recent power shortages spread across the country. Now the government has to reopen coal mines to meet the accelerating demand. It’s always going to be a dilemma.”

It’s a reality that senior officials have openly admitted. “China’s energy structure is dominated by coal power. This is an objective reality,” said Su Wei, deputy secretary-general of the National Development and Reform Commission in Beijing, in April. “We have no other choice. For a period of time, we may need to use coal power as a point of flexible adjustment.”

“The rise and fall of Lüliang—as well as other coal-heavy cities—is also the story of China’s changing economic and social structure,” said Judith Audin, a French sociologist who writes about the coal industry in Shanxi province. In 2010, when “Shanxi coal boss”—a term used as a symbol of Dickensian China—often appeared in social media, Lüliang’s GDP growth was at a staggering 21%. In 2020, it was only 2.7 percent.

Local officials have been talking about transition for a long time. When Lüliang’s economy was booming a decade ago, billions were poured into road construction and apartment buildings. But by 2015, supply had far exceeded the demand. Coupled with a decrease in coal consumption, the local economy crashed, and the mayor was sacked on corruption charges.

“Across Shanxi, there have been other experiments in recent years, too,” said Audin. In Datong, China’s “coal capital”, the coal mining land is now covered in solar panels and wind turbines.

“But even if these efforts were eventually successful, to what extent will these new energy businesses absorb the excess labour left by coal mining?” Audin said. “And how would the authorities deal with the generations of coal miners and their families who’ve helped power China but who have no other skills in the new economy?”