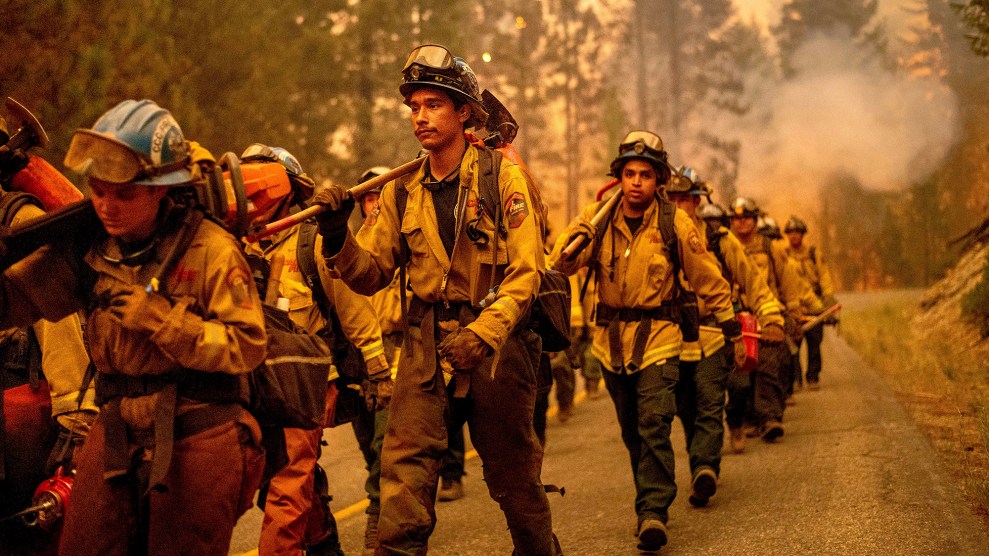 Zack Bashoor was 19 years old when he joined the US Forest Service in northwestern Montana to fight wildfires. At the time, Bashoor saw firefighting as his career, but after three summers of running chainsaws, digging trenches around blazes and covering structures in protective wrap, he left to become a resource forester at a lumber mill. Many of his peers left firefighting, too, citing the industry’s toxic workforce culture and low compensation for a physically demanding job with a risk of injury or occasionally, death.

“There’s this conundrum where a lot of brilliant young people come in and they eventually end up leaving,” Bashoor said. “They find something better to do that isn’t as dangerous and pays a little more money. There were very limited paths to permanent employment.”

But that might be changing, thanks to President Joe Biden’s infrastructure bill, which will raise wages for wildland firefighters and make some positions year-round. The $1.2 trillion legislation, which was signed into law by Biden Monday, includes $3.3 billion for wildfire management. While wildfire is a natural—and necessary—part of a healthy ecosystem, the more severe megafires of recent years are becoming increasingly common and destructive—fueled in part by climate change, as well as by fire suppression.

“It’s important for us to dump huge amounts of funding on this work and build the workforce to do it.”

In addition to improving incentives for wildland firefighters, the legislation will work to make forests more resilient to fire and curb its damaging effects by allocating $500 million each to thinning projects, planning and conducting prescribed fires, developing and improving fuel breaks where fires can be stopped or lulled, and mapping and defending at-risk communities. It also funds projects such as fire science research, real-time monitoring equipment and restoration treatments on federal and tribal land with a “very high” wildfire potential.

“It is encouraging to see additional funding being made available for restoration and climate- and wildfire-adaptation of forest ecosystems where the exclusion of fire over the past century has contributed to the vulnerability of current conditions to drought and wildfire,” Keala Hagmann, a research ecologist and assistant professor at the University of Washington, wrote in an email. Hagmann said it was “particularly encouraging” to see language in the bill that supports thinning and timber harvesting in an “ecologically appropriate” manner in order to retain large trees, along with timelines for monitoring progress and effects.

Large-scale funding is long overdue, said Lenya Quinn-Davidson, a fire advisor with the University of California Cooperative Extension in Humboldt County and the director of the Northern California Prescribed Fire Council. “It’s time to radically increase the scale of the work we’re doing,” she said. “We’ve never seen the investments we need to get ahead. It’s important for us to dump huge amounts of funding on this work and build the workforce to do it.”

Support for that workforce is a key part of the infrastructure bill. Increasing pay for wildland firefighters is necessary to bolster retention and raise the morale of those employed by the federal government, who are often lured away by higher-paying state, local and private industry. Firefighter shortages have become common in recent years even as fire seasons grow longer and more destructive. Some workers struggle with homelessness and economic uncertainty.

Many seasonal firefighters are classified as “forestry technicians” on paper, but the bill creates a new role—actually called “wildland firefighter”—that comes with a base pay raise of $20,000 or 50 percent of the starting salary, whichever is less. Wildfire Today reports that a rookie firefighter whose previous base pay was $28,000—before overtime and hazard pay, which significantly bump up earnings at the end of a season—would see their base pay jump to $42,000. That has real implications for entry-level firefighters and could give the Forest Service a better shot at retaining people like Bashoor. The bill also seeks to convert at least 1,000 firefighters of the roughly 15,000 federal wildland firefighters to year-round employees. In addition, it allocates money to establish mental health programs, including treatment for post-traumatic stress disorder.

It’s important to note that the infrastructure bill doesn’t put money into bank accounts today or tomorrow. What it does is authorize future Congresses to appropriate $3.3 billion for wildfire risk reduction efforts over several years. And appropriation doesn’t always equal implementation. Andy Stahl—a forester who has worked for the U.S. Forest Service, an Oregon forestry trade association and numerous conservation groups and is now the executive director of the nonprofit Forest Service Employees for Environmental Ethics—thinks it will be hard to hire people for the newly funded projects given current labor shortages. “I don’t know who these people are that Congress thinks are just beating down the doors saying, ‘This is the job I want,’ or are beating down the doors saying they want any job at all,” Stahl said.

Other experts say the allocations are a good start but not enough, given the scale of 21st century megafires. Matt Wibbenmeyer, an environmental economist at the policy research organization Resources for the Future, said that while the infrastructure bill addresses some of the challenges facing fire management agencies, even more money is needed. For example, the Forest Service alone estimates it needs $5 billion to $6 billion a year over the next 10 years to reduce flammable forest fuels in high priority areas—more than the bill allocates for many years. And the clock is ticking, as climate change continues to prime more forests for ignitions with hotter, drier summers. “It’s a step in the right direction, but what we really need here is an order of magnitude increase in how much of this risk reduction we’re investing in,” Wibbenmeyer said. “I think we have to get used to the fact that climate change is going to be expensive.”