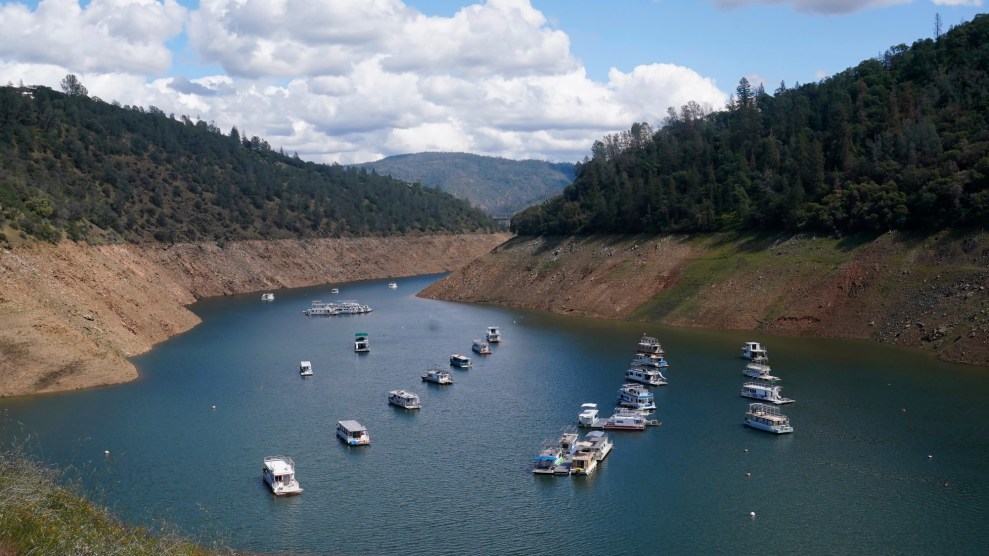 Houseboats in the drought-stricken waters of Lake Oroville, near Oroville, California, on April 19, 2022.Rich Pedroncelli/ AP

California’s two largest reservoirs are at critically low levels, signaling that the state, like much of the US west, can expect a searing, dry summer ahead.

It’s a dire sign for a state already struggling to manage water during the most severe megadrought in 1,200 years. The glittering turquoise water in both lakes have receded to expose dry, brown lake bed. Dramatic visuals compiled by the department of water resources contrast images of an abundant Oroville in 2019 with this year—when officials say the lake saw a “​​show a shocking drop in water levels.”

Only five years ago, in February 2017, Oroville was so full that millions of gallons of water eroded the main spillway of its dam, which is the tallest in the US, forcing evacuation of nearly 200,000 residents downstream.

“I feel I might have become a bit numb to both the numerical records and then the scenes of drought.”

This year, millions in the state are already subject to unprecedented water restrictions and many in rural areas are expecting their wells to run dry within months, if not weeks. “I feel I might have become a bit numb to both the numerical records and then the scenes of drought,” said John Abatzoglou, a climatologist at the University of California, Merced. “And that just reflects how rough the last three years have been for the state.”

Oroville is not as badly off this year as it was last year, when dozens of houseboats were hauled out of the lake because there wasn’t enough water to support them, and one of the state’s largest hydroelectric power plants was shut down for the first time since it was built in 1967.

“While we don’t expect every year to be as dry as this year or last, we have trended in California in the broader Southwest towards a more arid climate,” Abatzoglou said. “Meaning that water is becoming more and more scarce.”

The Oroville and Shasta reservoirs back up the two largest dams in the state. Oroville is central to the State Water Project system, which can service up to 27 million Californians and 750,000 acres of farmland. And Shasta is the key reservoir in the federal Central Valley Project, which serves areas as far north as Redding—all the way south into Bakersfield.

Officials at the State Water Project announced earlier this year that it would only be able to provide 5 percent of requested water supplies to its contractors. The federal project, meanwhile, announced it wouldn’t be providing any water to the state’s agricultural belt, and that cities would be allocated only 25 percent of their historical water use.

The low water allocations will force farmers to either fallow their fields or rely more on diminishing groundwater reserves, said Heather Cooley, research director at the nonprofit Pacific Institute. The implications will trickle down to rural residents across California, many of whom have seen household wells tap out in recent years, she said.

“We’re already seeing the effects of climate change in California. And we know that those effects are only going to get worse.”

Officials are also concerned that the reservoirs will be too shallow and hot for aquatic life this year. In an effort to protect endangered winter-run Chinook salmon, the bureau of reclamation and the department of water resources are seeking to install temporary chilling units at Shasta Dam to cool the water flowing into a national fish hatchery.

State and federal agencies will take “a conservative approach to water management” amid the drought, said Karla Nemeth, department of water resources director. “We need to be prepared for a hotter, drier future brought on by our changing climate.”

The current megadrought—which researchers found was the most severe in 1,200 years—is a sign that “we’re already seeing the effects of climate change in California.” Cooley said. “And we know that those effects are only going to get worse.”

Demand for water is also likely to go up as California and much of the West faces more extreme heatwaves and hotter summers. Farmers and residential homeowners will require more water to keep fields and gardens green, she notes.

With global heating, California’s dry seasons are likely to be drier, and its wet seasons might be wetter, said Allison Michaelis, an assistant professor in the department of earth, atmosphere, and environment​ at Northern Illinois University.

In a study published this year in the journal Earth’s Future, Michaelis and her colleagues found that climate crisis amped up the amount of rain and snowfall that flowed into Oroville in 2017, ahead of the deluge that year. And research suggests that the same force could drive more extreme droughts in coming decades.

“It is challenging to attribute any one, specific event to climate change,” said Michaelis, who led the study. “But given what I and my co-authors found in our Earth’s Future paper, and what other researchers are finding, we can expect California’s hydroclimate to be more volatile in the future.”