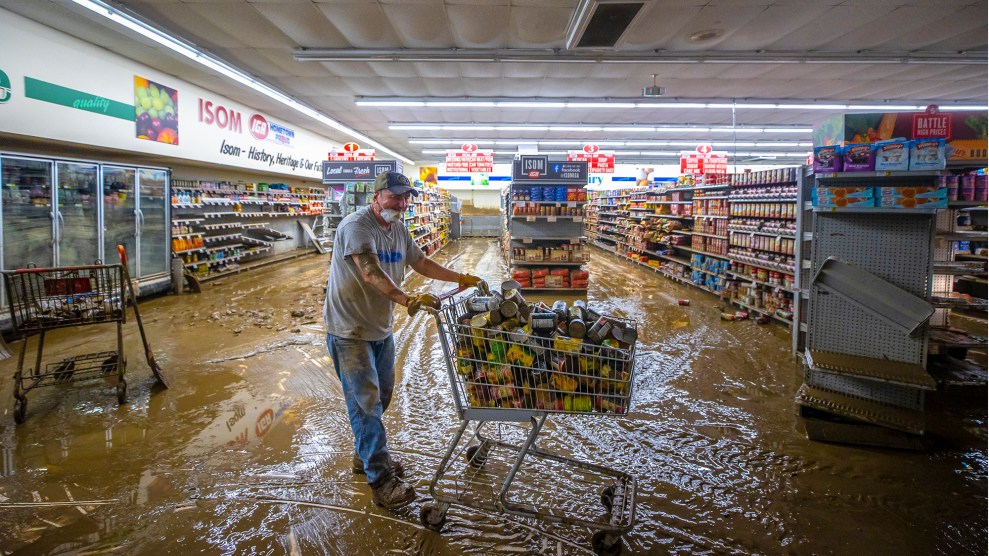 Appalachian states like Kentucky have a long, turbulent history with coal and mountaintop removal—an extractive mining process that uses explosives to clear forests and scrape soil in order to access underlying coal seams. For years, researchers have warned that land warped by mountaintop removal may be more prone to flooding due to the resulting lack of vegetation to prevent increased runoff. Without trees to buffer the rain and soil to soak it up, water pools together and heads for the least resistant path—downhill.

In 2019, a pair of Duke University scientists conducted an analysis of floodprone communities throughout the region for Inside Climate News that identified the most “mining damaged areas.” These included many of the same Eastern Kentucky communities that saw river levels rise by 25 feet in just 24 hours this past week.

“The findings suggest that long after the coal mining stops, its legacy of mining could continue to exact a price on residents who live downstream from the hundreds of mountains that have been leveled in Appalachia to produce electricity,” wrote Inside Climate News’ James Bruggers.

Now those findings feel tragically prescient. From July 25 to 30, Eastern Kentucky saw a mixture of flash floods and thunderstorms bringing upwards of four inches of rain per hour, swelling local rivers to historic levels. To date, the flooding has claimed at least 37 lives.

According to a 2012 study, mine drainage has polluted as much as 22 percent of all streams in central Appalachia.

Nicolas Zégre, director of West Virginia University’s Mountain Hydrology Laboratory, studies the hydrological impacts of mountaintop removal mining and how water moves through the environment. While it’s too early to know how much the area’s history of mining contributed to this year’s flooding, he said he thinks of Appalachia as “climate zero,” a region built on the coal industry, which contributed to rising global temperatures and increased carbon in the atmosphere.

“Whether it was the 2016 flood in West Virginia or the recent floods in Kentucky, there’s more intense rainfall due to warmer temperatures,” Zégre said, “and then that rainfall was falling on landscapes that have had their forests removed.”

To some regional scientists, strip mining isn’t the end-all-be-all link to increased flooding. A 2017 Environmental Science and Technology study monitored how mountaintop removal mining might actually help store precipitation. When a mountaintop is rocked by explosions, leftover material is packed into areas known as valley fills. According to the authors, “mined watersheds with valley fills appear to store precipitation for considerable periods of time.”

The study did note that material found inside valley fills often contains toxic chemicals and heavy metals created by the mining process. These compounds are subsequently washed into streams during heavy rain, a process known as alkaline mine drainage. According to a 2012 study, also from Environmental Science and Technology, alkaline mine drainage has polluted as much as 22 percent of all streams in central Appalachia.

Despite the fact that Kentucky and greater Appalachia have fueled much of the world’s energy supply for decades, many communities in the region struggle with poverty and aging infrastructure. Those conditions are likely to make it harder for many towns to recover from severe flooding—a particular concern given that climate change is expected to cause a mix of droughts and wetter summers throughout the Ohio River Basin.

The link between flood risk and mining damage means coal country flooding is more than an Appalachian issue. But Zégre told Grist that acknowledging the extraction process, and properly funding research to study the impacts, often gets pushed to the wayside, just like the region.

“Because [mountaintop removal mining] happens in backwoods Appalachia, nobody really thinks about it happening,” Zégre said. “They’re just people in DC who are just grateful to be able to turn on their light and have inexpensive electricity to charge their cars.”