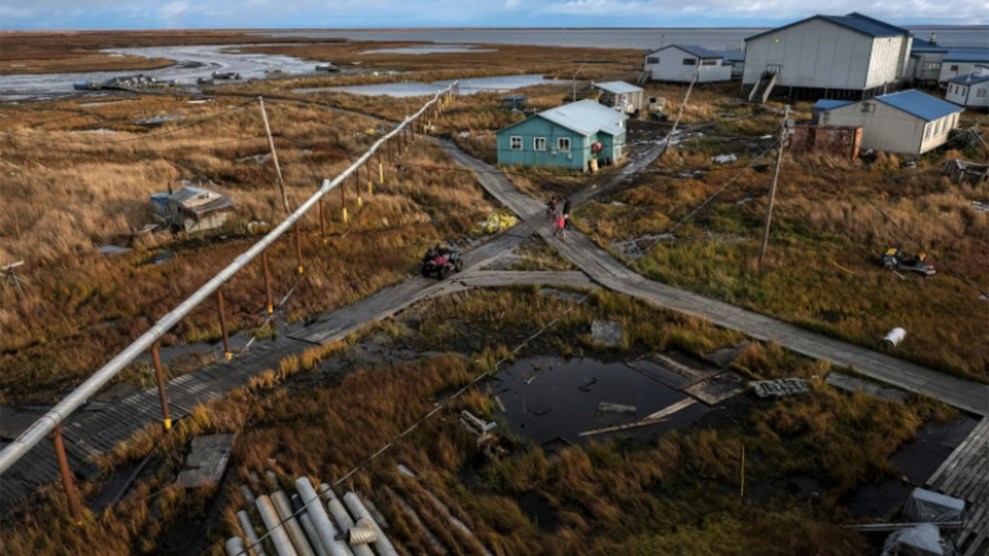 Niugtaq—the Yup’ik name for Newtok, Alaska—means “rustling grass” in Yugtun, the local Yup’ik language. That’s the sound you hear when you step off the small commuter plane that lands here daily. In late fall, tall dry tundra grass rustles in the wind as swans, ducks and geese paddle around the pond that fills a low spot between the runway and the village, dipping their heads into its cool muddy water. Nearly 200 people live in Newtok today, but the vast majority of them know they’re unlikely to stay here safely for much longer.

From a distance, not much seems amiss, but a stroll through the community, almost 500 miles west of Anchorage, reveals a myriad of health and safety problems. Climate warming has severely degraded the permafrost, so buildings are sinking into the tundra. The Ninglick River, which flows past the village, is rapidly devouring large swaths of land, taking with it buildings and homes during periods of high water.

Today, the land is like Jell-O when it’s not frozen: It wiggles when you walk on it.

In September, a storm surge created by a rare and fierce typhoon swallowed nearly 40 feet of riverbank—half of what remained between the public school, where people gather to play basketball in the gym most evenings, and the river’s edge. The shifting land rendered the community’s drinking water system unusable in 2019, and there hasn’t been a sewage lagoon here in years. Some residents dump their waste into the river, but storms and high tides from the nearby Bering Sea often wash it back up on what land is left.

Sarah Fairbanks, a tribal member and a clerk at one of Newtok’s two stores, said it was different when she was a kid. “It wasn’t even mushy, it was mostly dry,” she said. “Now it’s wet.” Today, the land is like Jell-O when it’s not frozen: It wiggles when you walk on it. Fairbanks has lived in many places—in Prescott, Arizona, as well as in Anchorage, and, as a child, she sometimes lived with her grandparents, 30 miles down the coast in Tununak. So leaving Newtok, she said, won’t be a big deal. “I’ll move eventually,” she said. “I wonder when that can be?” She laughed nervously. “When they move the store, I’ll probably move with it. I dunno.”

Ideally, the entire community will move as soon as possible. For more than two decades, Newtok has been trying to plan for a full relocation. This fall, the Department of Interior announced a $25 million infusion of cash to the village; two other Indigenous communities have also received grants. The money is meant to help fund relocation—what the government calls “managed retreat”—for communities heavily impacted by climate change. “Unfortunately, we’re going to have to think about this type of work more and more in the coming years as we see the effects of climate change reach so many other communities,” said Bryan Newland, the assistant secretary of Indian Affairs.

The Interior Department sees Newtok as a demonstration project: Newland said the agency will use the village as a resource so it can better plan for climate change impacts in other rural Indigenous communities. Melting permafrost, increasing wildfire threats, severe drought and other climate-change related phenomena mean dozens, perhaps hundreds, of small, predominantly Indigenous communities across the nation may need to move.

“When you’re in that situation, you’re faced with different options. You can take these funds and you can spread them like peanut butter and do a little tiny bit in a large number of communities,” said Newland. “But for places like Newtok, that isn’t going to meet the need.” Today, the question is just how far $25 million can go to meet the community’s needs.

People didn’t always live permanently in Newtok. The first federal record of residents comes from the 1949 census. The Yup’ik people who call Newtok home today lived a nomadic lifestyle until the Bureau of Indian Affairs told them they had to remain in place year-round so they could send their children to a federally funded school. But the land in Newtok has never been all that stable: Since the 1950s, the banks of the Ninglick River have been eroding at rates as high as 70 feet per year.

So Newtok’s residents have been working with the state of Alaska and various federal agencies and private funders on a large-scale move to higher, safer ,and healthier ground since at least the 1990s. The community selected Mertarvik, a site nine miles up and across the Ninglick River, as its destination. Between 1996 and 2012, local, state and federal officials spent more than $27 million on things like geotechnical reports, site assessments, water-quality testing, and planning and design at Mertarvik.

In 2018, the Denali Commission, an independent federal agency created by Congress to serve rural Alaska, published a record of decision outlining the details of a full relocation of Newtok to Mertarvik. It would be an entirely new community, and construction would include a road system, a power grid, an airport and at least 54 houses. The document estimated the project’s total cost at $120 million, though a co-chair of the commission said the agency has seen estimates over $300 million.

The first residents started moving into new homes in Mertarvik in 2019. As of March 2022, 28 new homes had been built at the new site, about half of what’s needed, and less than half of Newtok’s population had moved. “The number-one need right now is getting housing built and getting people out of danger and out of Newtok,” said Patrick LeMay, the Newtok relocation project manager. LeMay estimates building the additional housing would cost $8 million, not including sewer and water.

The new grant, however, may not fulfill that need. According to the Interior Department, it’s supposed to support core infrastructure. But the Bureau of Indian Affairs—which is part of the Interior Department — doesn’t consider housing infrastructure, LeMay said. (An Interior Department spokesperson declined to answer questions about precisely what the money can be used for.) “Since 2019, we’ve been operating on small little budgets from different agencies and each agency has what you can do with their money and what you cannot,” said LeMay. That piecemeal approach is difficult: “We end up spending more money doing that.”

“What does it take to create a new community? And you start biting it off in pieces that you can chew.”

Not all of the money will come from the federal government; for example, a new school could cost over $60 million, but the school district and the state of Alaska will have to figure out how to foot that bill. (The district agreed to pay $2.8 million for a new school design in 2022.) Mertarvik’s new emergency evacuation center came with a $20 million price tag, paid for with a combination of state and federal funding. “You know, essentially, it’s trying to put together all these pieces of the project,” said Jocelyn Fenton, the Denali Commission’s director of programs. “What does it take to create a new community? And you start biting it off in pieces that you can chew.”

Other top-priority projects are likely to total over $105 million, according to recent meeting notes from the Newtok Planning Group, which is composed of local, state and federal officials and both Newtok’s Native Village Council and Native corporation. Those projects include a community-wide sewer system and drinking water distribution to homes and a tribal office. A post office is estimated at $900,000, and a health clinic would cost an additional $2.3 million. The Interior Department recognizes that its latest $25 million grant won’t cover all the costs. “We know the need is great, and the need exceeds our ability to fund projects,” said Newland.

Officials from the Department of Interior met with Newtok’s Village Council the day after the funding announcement. Bernice John, an elder and a former Newtok Village Council member who relocated to Mertarvik two years ago, attended the meeting remotely. She said the council is now looking to use roughly $250,000 to employ someone to facilitate spending. “Hopefully, it’s someone who knows writing, reading, and speaking in English really well,” said John, who mostly speaks Yugtun at home. “We still need gravel money, housing money, a tribal office, a community building, water and sewer lagoon…”

She rattled off a long list of needs. And those needs are urgent: As of January 2023, small commuter and cargo planes were still arriving in Newtok as scheduled, but some predictions indicate the village’s airport runway and school could become inaccessible as soon as the next storm hits.