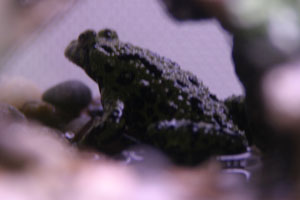 In case you missed it, last week we interns started a Frog Blog to compete with Kevin Drum’s catblogging. This week, we decided to overhaul our little fellow’s tank. One side effect of the Great Recession is that people are realizing how expensive it is to be pet owners. Thus, we were able to find a ten gallon tank complete with filter, a castle, artificial plants, eight pounds of gravel, a piece of driftwood, large rocks, a net, cleaning solution, food, and six fish that needed adopting—all for $30 on Craigslist.

Yesterday, we added six snails to the mix to keep the tank squeaky clean. Only after introducing the snails to their new frog neighbor did we realize that we’d accidentally acquired a stowaway fish as well in the water-filled pet store bag, bringing our grand tank total to seven.

As for the long-awaited naming results…After much consideration, we decided to stick with the traditional “Smart, Fearless Journalism” theme…With that, we introduce MUDRAKER.

1. In arts and culture, if you’re in the New York area, be sure to check out the new exhibit called “Frogs: A Chorus of Colors” at the Museum of Natural History.

2. Down Under, thousands of corroboree frog eggs were flown to safety to prevent them from becoming extinct due to a fungus that has already wiped out eight frog species in the past thirty years.

3. Without sounding like a depressing local news broadcast, here are some gruesome pictures from a car crash in Louisiana that left many dead frogs on the side of the road. If it’s any consolation, the frogs were already dead (killed by frog hunters) prior to the accident.

4. In India, people are flocking to worship a “miraculous” color-changing frog.

5. Melissa Segrest of ABC-7 in Los Angeles explains how to attract frogs to your backyard, noting how you can volunteer time with Frog USA to help endangered frog species.

6. In the film world, Disney’s upcoming animated feature “The Princess and the Frog” has sparked controversy over whether Disney’s first African-American princess has a skin color that is dark enough.