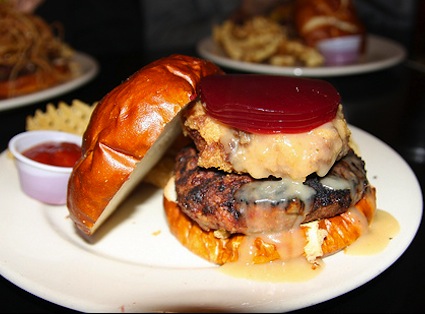 UPDATE: Marler Blog reported Wednesday afternoon that agribusiness behemoth Cargill is behind the tainted turkey. The company will soon announce a voluntary recall of nearly 36 million pounds of ground-turkey products, the blog reports, all of which emerged from a single processing facility in  Springdale, Arkansas. This latest fiasco does not mark the first time Cargill has sent out massive amounts of product potentially tainted with antibiotic-resistant salmonella. In 2009, a beef processor owned by the company had to recall 826,000 pounds of hamburger meat laced with a resistant strain called salmonella Newport. For good measure, the same plant had to recall another 22,000 pounds for the same reason a few months later. A USA Today investigation revealed that the troubled plant was a major supplier to the national school lunch program. Cargill, among the globe’s largest privately held companies, processes about 25 percent of the beef consumed in the United States, along with 14 percent of the turkey and 9 percent of the pork.

Once again, a drug-resistant “superbug” has infiltrated the national food supply. This time, the culprit appears to be tainted ground turkey, although federal investigators have not been able to definitively identify the source and thus have not issued a recall. The Centers for Disease Control reports that 77 people in 26 states have fallen ill; one person has died. Here’s how the CDC describes the situation:

The outbreak strain of Salmonella Heidelberg is resistant to many commonly prescribed antibiotics; this antibiotic resistance can increase the risk of hospitalization or possible treatment failure in infected individuals. [Emphasis added.]

“Treatment failure,” of course, is a polite way of saying “death.”

Such outbreaks are almost certainly related to the meat industry’s practice of giving confined livestock daily antibiotic doses, both to keep them functioning under cramped, unsanitary conditions and to make them grow faster. Will this outbreak finally force federal regulators to crack down on this practice? Doubtful.

As I reported last week, the USDA recently acknowledged the factory farm/antibiotic-resistance link in a “technical review” of the latest peer-reviewed science on the topic. But instead of throwing its weight behind a crackdown of factory-farm antibiotic abuse, the agency unceremoniously stepped on the report, removing it from its website without explanation after meat-industry groups complained about it.

Then there’s the FDA. As the agency that regulates pharmaceuticals, the FDA could act to protect the public from drug-resistant pathogens by limiting their use at factory farms. The agency strongly and publicly acknowledged the link back in 2009. Yet it maintains its official stance that antibiotics should be “used judiciously” on factory farms, and it leaves it to the industry to define what that means.

In other words, our federal watchdogs know what’s causing deadly outbreaks like the current one; they’ve just decided not to do anything to prevent them. A 2010 poll by the Union of Concerned Scientists and Iowa State University may explain why. The pollsters got 1,700 USDA and FDA employees to respond to a detailed questionnaire about industry influence on their agencies’ decision making. The results are nearly as sickening as a tainted turkey burger:

In the absence of the backbone required to stand up to industry, the USDA—which oversees the safety of meat products—can only issue “voluntary recalls” of products that have been infected with antibiotic-resistant pathogens: a desperate attempt to slam the barn door shut after the tainted cows have escaped. In this case, the agency can’t even take that feeble action, because investigators still haven’t been able to trace the outbreak to a specific product. In the absence of a “voluntary recall,” the USDA is left to “remind consumers of the critical importance of following package cooking instructions for frozen or fresh ground turkey products.” In other words, sorry folks—you’re on your own.

Meanwhile, scientists in Europe have identified yet another new strain of “super” salmonella, this one resistant to a range of antibiotics, including the powerful one known as Cipro, Reuters reports. The strain appears to thrive in poultry farms in Africa, where US-style factory livestock farming is being hotly promoted. According to Reuters, researchers have found the strain in chickens and turkeys from Ethiopia, Morocco, and Nigeria, where heavy antibiotic use in poultry production “may have contributed to this rapid spread.”