Just how bad is California’s water shortage? Really, really bad, according to these new maps, which represent groundwater withdrawals in California during the first three years of the state’s ongoing and epochal drought: 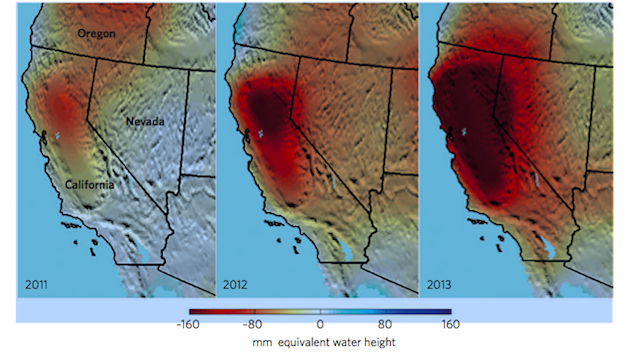 The maps come from a new paper in Nature Climate Change by NASA water scientist James Famiglietti. “California’s Sacramento and San Joaquin river basins have lost roughly 15 cubic kilometers of total water per year since 2011,” he writes. That’s “more water than all 38 million Californians use for domestic and municipal supplies annually—over half of which is due to groundwater pumping in the Central Valley.”

Famiglietti uses satellite data to measure how much water people are sucking out of the globe’s aquifers, and summarized his research in his new paper.

More than 2 billion people rely on water pumped from aquifers as their primary water source, Famiglietti writes. Known as groundwater (as opposed to surface water, the stuff that settles in lakes and flows in streams and rivers), it’s also the source of at least half the irrigation water we rely on to grow our food. When drought hits, of course, farmers rely on groundwater even more, because less rain and snow means less water flowing above ground.

The lesson Famiglietti draws from satellite data is chilling: “Groundwater is being pumped at far greater rates than it can be naturally replenished, so that many of the largest aquifers on most continents are being mined, their precious contents never to be returned.”

The Central Valley boasts some of the globe’s fastest-depleting aquifers—but by no means the fastest overall. Indeed, it has a rival here in the United States. The below graphic represents depletion rates at some of the globe’s largest aquifers, nearly all of which Famiglietti notes, “underlie the world’s great agricultural regions and are primarily responsible for their high productivity.” 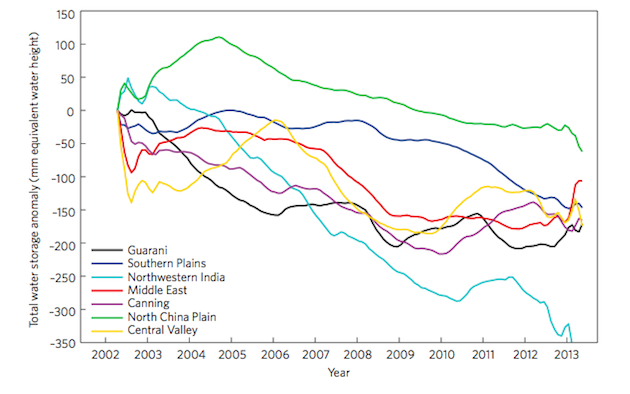 The navy-blue line represents the Ogallala aquifer—a magnificent water resource now being sucked dry to grow corn in the US high plains. Note that it has quietly dropped nearly as much as the Central Valley’s aquifers (yellow line) over the past decade. The plunging light-blue line represents the falling water table in Punjab, India’s breadbasket and the main site of that irrigation-intensive agricultural “miracle” known as the Green Revolution, which industrialized the region’s farm fields starting in the 1960s. The light-green line represents China’s key growing region, the north plain. Its relatively gentle fall may look comforting, but the water table there has been dropping steadily for years.

All of this is happening with very little forethought or regulation. Unlike underground oil, underground water draws very little research on how much is actually there. We know we’re siphoning it away faster than it can be replaced, but we have little idea of how long we can keep doing so, Famiglietti writes. He adds, though, that if current trends hold, “groundwater supplies in some major aquifers will be depleted in a matter of decades.” As for regulation, it’s minimal across the globe. In most places, he writes, there’s a “veritable groundwater ‘free for all’: property owners who can afford to drill wells generally have unlimited access to groundwater.”

And the more we pump, the worse things get. As water tables drop, wells have to go deeper into the earth, increasing pumping costs. What’s left tends to be high in salts, which inhibit crop yields and can eventually cause soil to lose productivity altogether. Eventually, “inequity issues arise because only the relatively wealthy can bear the expense of digging deeper wells, paying greater energy costs to pump groundwater from increased depths and treating the lower-quality water that is often found deeper within aquifers,” Famiglietti writes—a situation already playing out in California’s Central Valley, where some low-income residents have seen their wells go dry. In a reporting trip to the southern part of the Central Valley this past summer, I saw salt-caked groves with wan, suffering almond trees—the result of irrigation with salty water pumped from deep in the aquifer.

All of this is taking place in a scenario of rapid climate change and steady population growth—so we can expect steeper droughts and more demand for water. Famiglietti’s piece ends with a set of recommendations for bringing the situation under control: Essentially, let’s carefully measure the globe’s groundwater and treat it like a precious resource, not a delicious milkshake to casually suck down to the dregs. In the meantime, Famiglietti warns, “further declines in groundwater availability may well trigger more civil uprising and international violent conflict in the already water-stressed regions of the world, and new conflict in others.”