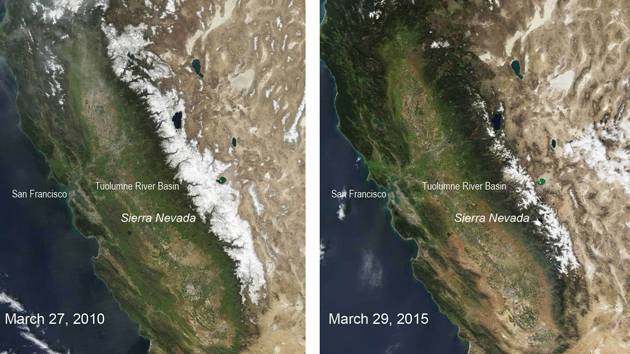 NASA/MODISNASA's Aqua satellite captured these images of the Sierra Nevadas showing the mountain range's snowcover before the drought began (left) and then again earlier this year (right).

California’s historic drought may be even more exceptional than we thought.

In a study published yesterday, scientists made a startling discovery about the severity of California’s dry spell: They estimated that the Sierra Nevada mountain range’s snowpack levels this year are the lowest they’ve been for 500 years. That’s right, since roughly the year 1500.

This is bad news for Californians: Snowfall in the mountains can account for as much as one-third of the state’s water supply during a normal year.

Last spring, measurements showed that levels were at their lowest point in the 75 years they’ve been recorded. (That period is shown in red on the graph below.) But scientists had to get creative in order to determine how much snow had fallen over the centuries before snowpack measurements were taken. Paleoclimatologists from the University of Arizona’s Laboratory of Tree-Ring Research analyzed studies that used tree rings to reconstruct historical rainfall and temperatures in California’s mountains. By combining this data, they were able to estimate spring snowpack levels going back half a millennium, as represented in the graphic below. (SWE stands for “snow water equivalent,” which means snowpack). 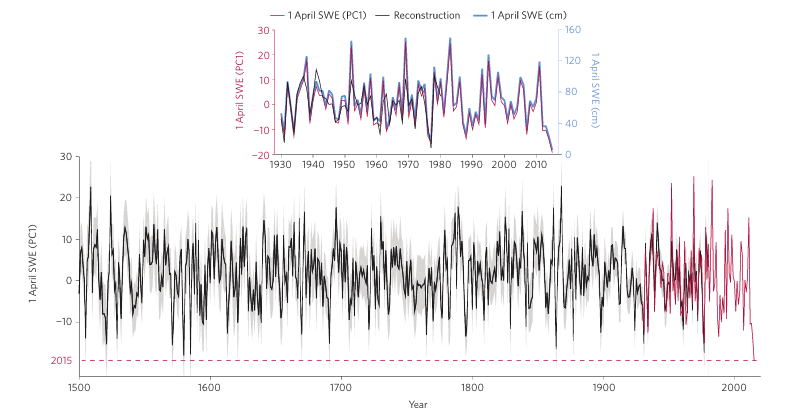 They found that while there have been many bad years for snow in the mountains, the last time the snowpack sank to this year’s levels was around the year 1500.

According to Greg Corbin, a meteorologist at the National Oceanic and Atmospheric Administration, the state’s water system can only store a limited amount of rain runoff, so it relies on snowpack to replenish water reserves. Until it starts snowing again, California has “a long, long way to go,” to restore its water, he says.