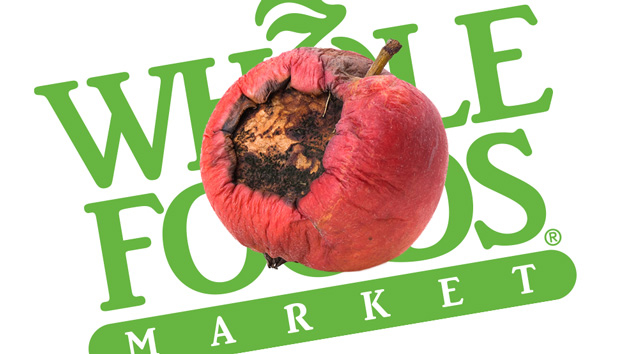 Whole Foods Market co-CEO and co-founder John Mackey has never hidden his disdain for labor unions. “Today most employees feel that unions are not necessary to represent them,” he told my colleague Josh Harkinson in 2013. That same year, Mackey echoed the sentiment in an interview with Yahoo Finance’s the Daily Ticker. “Why would they want to join a union? Whole Foods has been one of [Fortune‘s] 100 best companies to work for for the last 16 years. We’re not so much anti-union as beyond unions.”

On September 25, the natural-foods giant gave its workers reason to question their founder’s argument. Whole Foods announced it was eliminating 1,500 jobs—about 1.6 percent of its American workforce—”as part of its ongoing commitment to lower prices for its customers and invest in technology upgrades while improving its cost structure.” The focus on cost-cutting isn’t surprising—Whole Foods stock has lost 40 percent of its value since February, thanks to lower-than-expected earnings and an overcharging scandal in its New York City stores.

Supervisors “in all departments were demoted…and told they were no longer supervisors, but still had to fulfill all of the same duties.”

Sources inside the company told me that the layoffs targeted experienced full-time workers who had moved up the Whole Foods pay ladder. In one store in the chain’s South region, “all supervisors in all departments were demoted to getting paid $11 an hour from $13-16 per hour and were told they were no longer supervisors, but still had to fulfill all of the same duties, effective immediately,” according to an employee who works there.

I ran that claim past a spokesman at the company’s Austin headquarters. “We appreciate you taking the time to reach out and help us to set the record straight,” he responded, pointing to the press release quoted above. When I reminded him that my question was about wage cuts, not the announced job cuts, he declined to comment.

Another source, from one of Whole Foods’ regional offices, told me the corporate headquarters had ordered all 11 regional offices to reduce expenses. “They’ve all done it differently,” the source said. “In some regions, they’ve reduced the number of in-store buyers—people who order products for the shelves.”

I spoke with a buyer from the South region who learned on Saturday that, after more than 20 years with the company, his position had been eliminated. He and other laid-off colleagues received a letter listing their options: They could reapply for an open position or “leave Whole Foods immediately” with a severance package—which will be sweetened if they agree not to reapply for six months. If laid-off employees manage to snag a new position that pays less than the old one did, they are eligible for a temporary pay bump to match the old wage, but only for a limited time.

Whole Foods has “always been an 80/20 company” in its ratio of full- to part-time workers, but managers are now “incentivized to bring down that ratio.”

Those fortunate enough to get rehired at the same pay rate may be signing up for more work and responsibility. At his store, the laid-off buyer told me, ex-workers are now vying for buyer positions that used to be handled by two people—who “can barely get their work done as it is.”

My regional office source told me that the layoffs and downscaling of wages for experienced staffers is part of a deliberate shift toward part-time employees. Whole Foods has “always been an 80/20 company,” the source said, referring to it ratio of full- to part-time workers. Recently, a “mandate came down to go 70/30, and there are regions that are below that: 65/35 or 60/40.” Store managers are “incentivized to bring down that ratio,” the source added.

Employees working more than 20 hours per week are eligible for benefits once they’ve “successfully completed a probationary period of employment,” the Whole Foods website notes. But some key benefits are tied to hours worked. For example, employees get a “personal wellness account” to offset the “cost of deductibles and other qualified out-of-pocket health care expenses not covered by insurance,” but the amount is based on “service hours.”

And part-time employees tend not to stick around. My regional source said that annual turnover rates for part-timers at Whole Foods stores approach 80 percent in some regions. According to an internal document I obtained, the national annualized turnover rate for part-time Whole Foods team members was more than triple that of full-timers—66 percent versus about 18 percent—in the latest quarterly assessment. “Whole Foods has always been a high-touch, high-service model with dedicated, engaged, knowledgeable employees?,”? the source said. “How do you maintain that, having to [constantly] train a new batch of employees?”

One of Whole Foods’ “core values,” is to support the “happiness and excellence” of its employees. But that may be hard to reconcile with pleasing Wall Street.

Of course, Whole Foods operates in a hypercompetitive industry. Long a dominant player in natural foods, it now has to vie with Walmart, Trader Joe’s, and regional supermarket chains in the organic sector. Lower prices are key to staying competitive, and in order to maintain the same profit margins with lower prices, you have to cut your expenditures. Whole Foods’ labor costs, according to my regional source, are equal to about 20 percent of sales—twice the industry standard.

It’s not unusual for a publicly traded company to respond to a market swoon by pushing down wages and sending workers packing. But Whole Foods presents itself as a different kind of company. As part of its “core values,” Whole Foods claims to “support team member [employee] happiness and excellence.” Yet at a time when the company’s share price is floundering and its largest institutional shareholder is Wall Street behemoth Goldman Sachs—which owns nearly 6 percent of its stock—that value may be harder to uphold.

Workers join unions precisely to protect themselves from employers that see slashing labor costs as a way to please Wall Street. “There’s a fear of unions coming in, because employees are bitter,” the regional-office source said. “People talk about it in hushed tones.”