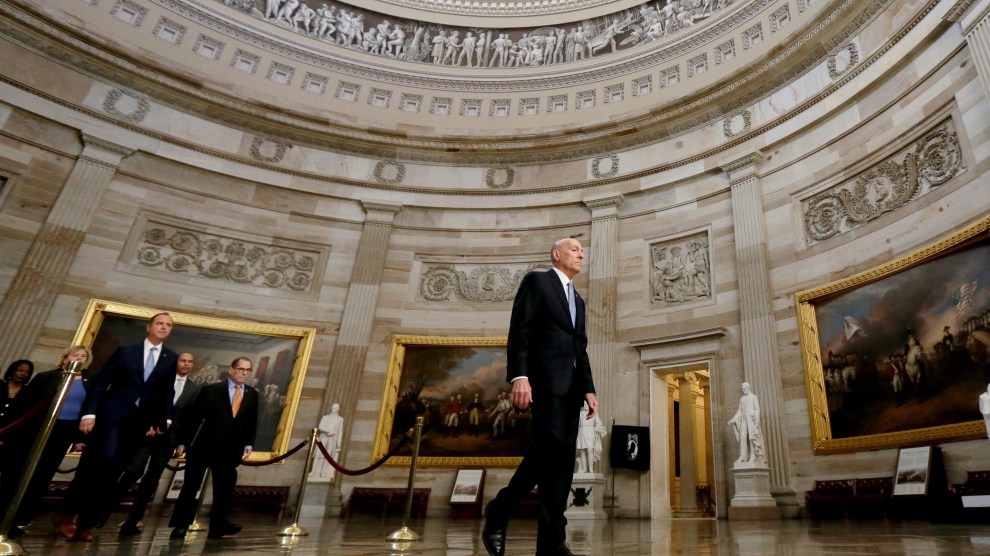 House Sergeant at Arms Paul Irving, center, leads the way through the rotunda on his way to the Senate to exhibit the articles of Impeachment against President Donald Trump on Capitol Hill in Washington, Thursday, Jan. 16, 2020, followed by impeachment managers.Julio Cortez/AP Photo

On Saturday, House Democrats made their formal case to the Senate that President Donald Trump should be removed from office for withholding military aid as a ploy to pressure Ukrainian officials to investigate his political opponent.

In the 111-page brief, impeachment managers argued that their evidence showed Trump was guilty of both abuse of power and obstruction of justice and that the Senate should remove Trump to safeguard the 2020 election and “eliminate the threat that the President poses to America’s national security.”

Here’s how House Democrats summed up their case, which echoes the findings from House Judiciary and Intelligence committees:

President Trump abused the powers of his office to invite foreign interference in an election for his own personal political gain and to the detriment of American national security interests. He abandoned his oath to faithfully execute the laws and betrayed his public trust. President Trump’s misconduct presents a danger to our democratic processes, our national security, and our commitment to the rule of law. He must be removed from office.

You can read the full document here.

In an initial response, Trump’s legal team argued in a six-page brief that the Democrats’ impeachment was “constitutionally invalid,” adding that the articles themselves were an “affront to the Constitution.” They added that the impeachment investigation was part of a “brazen and unlawful attempt to overturn the results of the 2016 election and interfere with the 2020 election.” Opening arguments for the impeachment trial will begin in earnest on January 21.