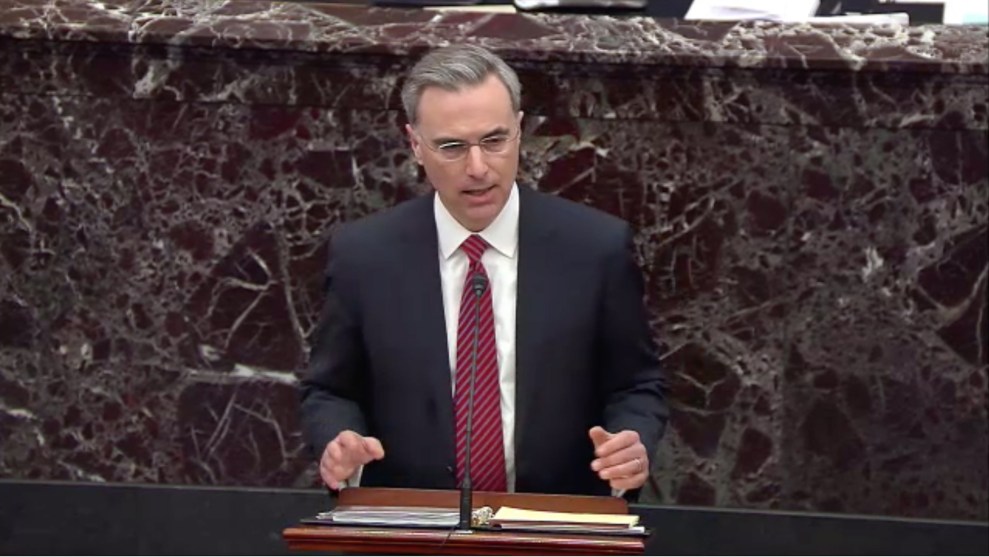 It took less than two hours in the Senate impeachment trial on Tuesday for a member of President Donald Trump’s defense team to tell an outright lie.

White House Counsel Pat Cipollone began by complaining about House Democrats’ process for interviewing witnesses in the impeachment inquiry. “The proceedings took place in the basement of the House of Representatives,” Cipollone said. Then he added, “Not even [House Intelligence Committee chair Adam] Schiff’s Republican colleagues were allowed into the SCIF”—the Sensitive Compartmented Information Facility where the interviews took place.

There are several issues with that narrative. For one, closed-door interviews are routine for sensitive congressional probes. But more important, plenty of Republicans participated in the closed-door meetings; they sat on the three committees leading the impeachment investigation. The stunt pulled by dozens of Republicans who loudly claimed otherwise was a clear attempt to distract from the inquiry’s bombshell testimonies.

On Tuesday, Cipollone breezed past those truths to parrot Trump’s longstanding claim that the impeachment proceedings have been rigged from the start. It was a clear signal that Trump’s lawyers had no intention of rising up to the solemnity of a historic impeachment trial and instead would seek to turn C-Span into Fox News.

Fact check: “Not even Schiff’s Republican colleagues were allowed into the SCIF.”

1. Closed-door interviews are routine for sensitive congressional probes
2. Republicans participated in the meetings

It's day one of the impeachment trial and Trump's team is already lying. pic.twitter.com/KSZA5KJG5P