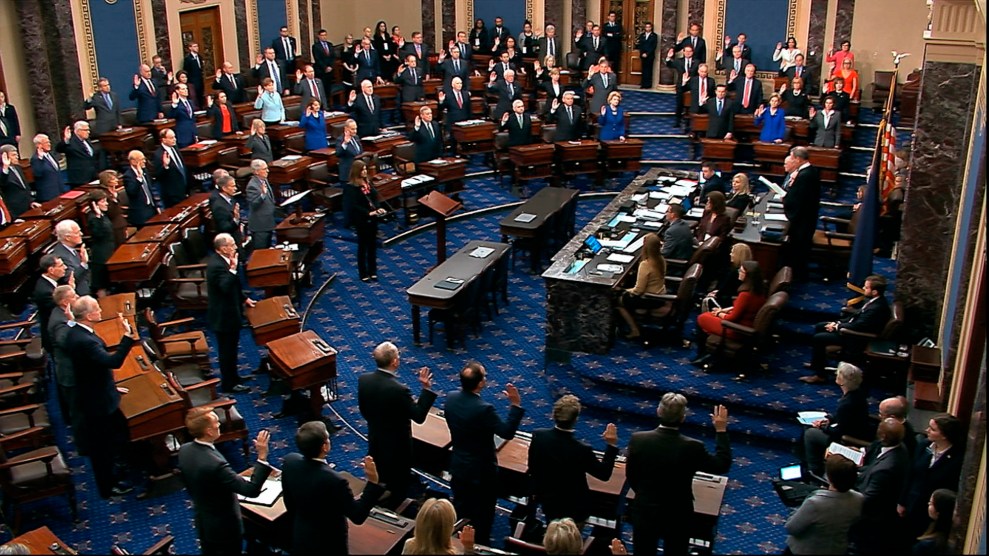 President Donald Trump’s senatorial allies-slash-jurors hit the Sunday news shows to try out their best defenses of him ahead of his impeachment trial, which begins on Tuesday.

On ABC’s This Week, Sen. Richard Shelby (R-Ala.) disputed the fact that the president has encouraged foreign  interference in US elections. “Do you think it was proper to solicit foreign interference in our election?” George Stephanopoulos asked Shelby. “I don’t know if that’s actually been proven. That’s in dispute,” Shelby said.

When Stephanopoulos pointed out that Trump has publicly called for foreign election interference, Shelby argued that those statements were only “political.” “They make them all the time…People make them. People do things. Things happen.”

Shelby on Trump soliciting foreign interference: "Those are just statements, political"@GStephanopoulos: "So it's OK?"

GS: This is the president of the U.S.

Meanwhile, Sen. John Cornyn (R-Texas), denied the findings of a watchdog report from the Government Accountability Office, which found that the Trump administration had violated the law by withholding aid to Ukraine. The president’s actions were “certainly not a crime,” he asserted on CBS’s Face the Nation.

.@JohnCornyn appears to dispute a watchdog report on Trump's withholding of aid to Ukraine: "[It's] Certainly not a crime and something that no one had ever dreamed in the past would have risen to the level of impeachment," he argues. pic.twitter.com/937yftfMSn

Over on NBC’s Meet the Press, Sen. David Perdue (R-Ga.) argued that testimony from Lev Parnas, an indicted associate of presidential lawyer Rudy Guiliani, should not be permitted in the Senate because it is “second-hand information.” “This is a distraction,” Perdue said.

“How is it second hand? He was in Ukraine,” Chuck Todd said. “He was doing the bidding.”

Perdue then seemed to imply that Parnas, in fact, had no reliable evidence and was only acting to “have his sentence reduced.”

Perdue: “Again, second hand information. This is a distraction.”

Chuck Todd: “How is it second hand? He was in Ukraine. He was doing the bidding.” pic.twitter.com/qir3A1gRnK