PANETTA AT THE CIA….Fred Kaplan asked Richard Clarke about Leon Panetta today, and Clarke mentioned that a point in Panetta’s favor as CIA director is that as Bill Clinton’s budget director and White House chief of staff during the 90s 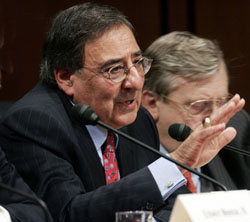 “he was one of a very few people who knew about all of the covert and special-access programs.” That could come in handy:

These “special-access programs” — satellites, sensors, and other intelligence-gathering devices whose very existence is known only to those with compartmentalized security clearances — form a welter of costly, overlapping, ill-coordinated, and largely unsupervised projects that are run by private contractors to a greater extent than most people might imagine.

One former CIA official who is familiar with these programs (and who asked not to be identified) speculates that Panetta’s main task might be to clean up not only the agency’s high-profile mess — the “black ops” that have tarnished America’s reputation around the world — but this budgetary-bureaucratic mess as well. Certainly, he knows where the line items are buried to a degree that few insiders can match.

But I wonder how much control Panetta would have over this stuff. Isn’t most of it part of NSA, NRO, or other Pentagon outfits? Still: an interesting point. Panetta’s past experience may be more relevant than people think.