I’ve gotten a bunch of requests for a response to George Will’s assertion that “If you’re 29, there has been no global warming for your entire adult life.” I’m actually puzzled enough by that comment to not really know how to respond.

Sigh.  Here’s the deal: Will is being cute.  If you’re 29, you became an adult in 1998, and average global temperatures last year were lower than they were in 1998. So: no global warming in your adult lifetime. 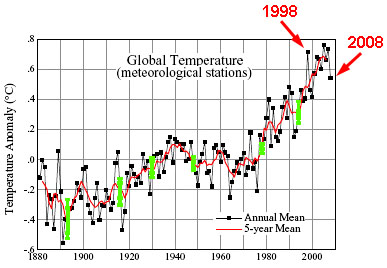 In case you’ve missed it, this is the new favorite talking point from the chucklehead denialist set.  The earth is actually cooling!  But as about a thousand serious climate researchers have pointed out, it’s not true.  Global temps have been trending up for over a century, but in any particular year they can spike up and down quite a bit.  In 1998 they spiked up far above the trend line and last year they spiked below the trend line.  So 2008 was cooler than 1998.

Of course, you can prove anything you want if you cherry pick your starting and ending points carefully enough.  For example: The year 2000 was below the trend line and 2005 was above it.  Temps were up 0.4°C in only five years!  The seas will be boiling by 2050!

This is idiotic, and only deliberate charlatans who think they have an especially gullible audience bother with it.  It’s the trend line that matters, and the trend line has been going up for decades right along with rising CO2 concentrations.  Listen to the climatologists, not the charlatans.