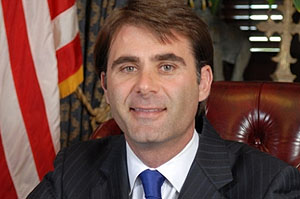 toward its seemingly inevitable conclusion, the Washington Post introduces us to André Bauer, the lieutenant governor who will take over if Sanford resigns:

Bauer, 40, has made a career of running against South Carolina’s establishment — and winning. Elected to the state legislature at age 26, he became known as an ambitious politician, rising quickly and winning the state’s No. 2 position in 2002.

Yet as lieutenant governor, he has become known as much for his personal behavior as for his political record. In 2003, he was charged with driving 60 mph and running two red lights in downtown Columbia. When pulled over, Bauer was so aggressive that a police officer pulled a gun on him.

In 2006, Bauer was stopped by a state trooper who clocked him driving 101 mph on an interstate highway. He used his state-issued radio to tell the officer he was “S.C. 2” — the code for lieutenant governor — and was not ticketed. Then, weeks later, Bauer was injured when the single-engine airplane he was piloting crashed and burned.

….Over the years, Bauer’s romantic life has stirred rumors, the latest bubbling up in recent days. In an interview Monday with the State, a Columbia newspaper, Bauer voluntarily brought up the subject of his sexual orientation. “Is André Bauer gay? That is now the story,” the lieutenant governor was quoted as saying, adding his answer: “One word, two letters. ‘No.’ Let’s go ahead and dispel that now.”

I live in California, so I can hardly throw stones at another state’s dysfunctional politics.  But I can still throw pebbles.  The Palmetto State really knows how to pick ’em, doesn’t it?