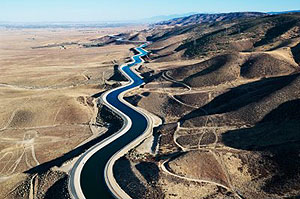 The city of Palmdale is running out of water, and as a result prices are going up.  Way up:

“My water bill went from $139 to $468,” [Mary] Sanchez said at that meeting. Since then Sanchez received another monthly bill, one for $324. Together that meant she owed the water district $792, plus a prior balance that brought her total to $924. “That’s my two car payments,” said Sanchez, who moved into her home in November….I feel discouraged. I feel like we should have stayed in Santa Clarita and lived in our apartment.”

There it is.  There’s the end.  This is the turning point I’ve been waiting for.  With water costs this high, she’d rather be in a city apartment.  I’ve been wondering for years what would herd people in from the exurbs.  It struck me as a race between costs of water and costs of firefighting.  For a while, the cost of gas and the commute was coming on strong, but that horse fizzled.  Now we need people to know this before they lock themselves into houses.  Ms. Sanchez, don’t become a water district activist!  Spend your energy telling your friends not to do what you did!   Tell them the house and lawn isn’t worth it.  You can still save them.  That’s what we need.

This is sort of California-centric, since water isn’t necessarily a suburban problem everywhere.  Schaumburg still has plenty of water from Lake Michigan, I assume.  Still, it is kind of breathtaking.

On the other hand, plenty of people who live in the Valley have $500/month electric bills in the summer from running their air conditioners, and they move/stay there regardless.  So maybe all that happens here is that people grumble for a bit and then get used to high water bills, just like they’ve gotten used to high air conditioning bills.

In fact, considering that Palmdale has high water bills and high air conditioning bills and high summer fire hazards AND sits right smack on top of a major fault line — well, the fact that people still live there at all probably means that people are willing to live just about anywhere no matter what it costs.  Maybe a $200 water bill is just another pinprick.