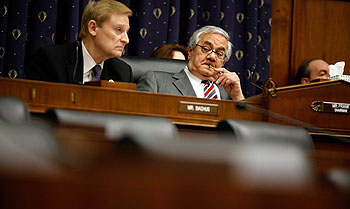 Ryan Grim and Arthur Delaney write today about the House Committee on Financial Services — aka the banking committee — and how Democrats decided to populate it when they won control of Congress in 2006:

The banking committee […] is known as a “money committee” because joining it makes fundraising, especially from donors with financial interests litigated by the panel, significantly easier. The Democratic leadership chose to embrace this concept, setting up the committee as an ATM for vulnerable rookies. Eleven freshman representatives from conservative-leaning districts, designated as “frontline” members, have been given precious spots on the committee. They have individually raised an average of $1.09 million for their 2010 campaigns, according to the Center for Responsive Politics; by contrast, the average House member has raised less than half of that amount.

….Because the frontline members face the possible end of their careers in November and may be beholden to the whims of powerful donors, the Democrats’ 13-seat advantage on the committee is weaker than it appears. If seven members break with the party on a vote, the GOP wins. Rep. Luis Gutierrez (D-Ill.) refers to them as “the unreliable bottom row.” (The second row is little better, populated by the Democrats from red-leaning areas who first took office after the 2006 election.)

In short, by setting up the committee as a place for shaky Democrats from red districts to pad their campaign coffers, leadership made a choice to prioritize fundraising over the passage of strong legislation. “It makes it difficult to corral consensus,” says Rep. Stephen Lynch (D-Mass.), a subcommittee chairman, of the unwieldy panel.

The whole piece is worth a read, including the explanation of how financial interests these days tend to get local frontmen — realtors, car dealers, farmers, small credit unions — to push for loopholes that would be hard to pass if it were obvious that Wall Street firms were behind them. And for sheer entertainment, don’t miss the description of senior members of the banking committee twisting themselves into knots to change their votes on legislation in order to curry favor with industry lobbyists once they’ve decided they were supporting a lost cause. It’s politics at its finest.

But of course, keep one other thing in mind too: Democrats may cave on some of this stuff — and shame on them for doing so — but at least there’s still a core group of them willing to do what’s right. On the Republican side, the number of committee members willing to what’s right is precisely zero.