Our story so far: on Friday I was chatting with Felix Salmon about leverage and capital requirements in the financial system, and we agreed that most of the 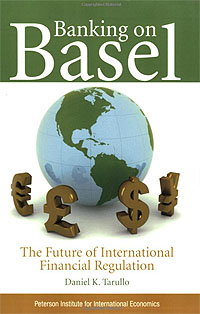 action on this was taking place on the international stage. But because it’s largely done behind closed doors, there’s very little reporting on what progress is being made. Today, though, Bloomberg’s Yalman Onaran sneaks in a bit about international standardmaking in a long story that’s mostly about U.S. financial reform:

Looming over discussions about liquidity are rules proposed in December by the Basel Committee on Banking Supervision, a 35-year-old panel that sets international capital guidelines. The new framework would require banks worldwide to hold enough unencumbered assets to meet all of their liabilities coming due within 30 days. That amount, called the liquidity coverage ratio, could be used to offset cash outflows during a panic. Banks would also have to maintain a “net stable funding ratio” of 100 percent, meaning they would need an amount of longer-term loans or deposits equal to their financing needs for 12 months, including off-balance-sheet commitments and anticipated securitizations.

The Basel committee, which is collecting comments on the proposed rules through April 16, would establish clear definitions of liquid assets and funding needs, rather than leave those determinations to the banks. It would also set new capital requirements. The committee expects to complete its work by the end of the year and implement the regulations by the end of 2012.

The liquidity rules would reduce the annual profit of Bank of America Corp. by $1.5 billion and of Citigroup by $1.2 billion, JPMorgan estimated in a Feb. 17 report.

Bank analysts and executives say the proposals won’t be implemented in their current form. The rules are “too restrictive and we believe they could ultimately be watered down,” Barclays Plc said in a Feb. 8 report. Societe Generale SA’s Severin Cabannes has been telling investors the Basel regulations will likely be weakened, according to investors who have met with him.

The Basel rules are important, and they take a long time to coalesce into something acceptable to all the main players — especially the US, whose abundance of small banks makes it wary of rules which are generally designed for much bigger institutions. It’s entirely foreseeable that the Basel committee’s self-imposed 2012 deadline is going to come and go. But if and when the rules go into effect, they’re going to have much more force than anything coming out of Congress or Treasury. So keep an eye on them: if they get diluted significantly from their present form, that’s a bad sign.

Well, if Onaran is correct and “bank analysts and executives” are already saying the new rules are DOA and need to be watered down, then we have a bad sign right from the get-go. What’s more, a lot still depends on just who these rules apply to — regulating the shadow banking system is crucial here — exactly how the rules are worded, and how quickly they get taken up by the major financial players around the world — none of which is clear yet. The big fight, I think, will be between those who want fairly blunt and primitive rules and those who want complicated, nuanced rules. The former helps keep the system stable. The latter helps banks figure out ways to outwit the rules and make more money.

So stay tuned. Given that Congress appears very unlikely to establish blunt rules of its own, this is where the action is.