So what’s going to be the Republican position on the START nuclear treaty with Russia? Fox News has already set the tone, Sarah Palin has set the party line (“It’s unbelievable”), and now the Republican leadership has officially jumped in with supporting 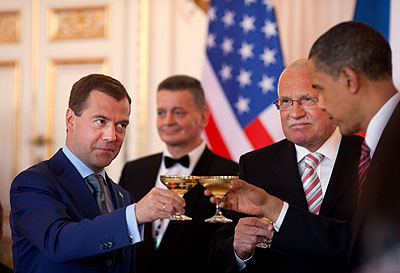 details. “There’s been no ambiguity in our position on a strong missile defense, nuclear triad and the need to verify any treaty,” says Mitch McConnell’s flack. Spencer Ackerman is flummoxed about what the hell they’re talking about:

This is quite a curious set of objections. The “unilateral” Russian references to missile defense don’t appear to be more than the Russians expressing dissatisfaction with missile defense, none of which bind the U.S. from deploying a missile shield. As for verification, for the first time in nuclear-arms treaties with the Russians, New START allows on-site inspections of Russian missile silos and nuclear storage areas — and the main reason for that is if the treaty relied on what’s called telemetry, or information about U.S. missile launches, that would potentially jeopardize missile defense by giving away too much information about the missiles that a missile-defense system relies upon. How’s that for a commitment to missile defense?

And what’s this stuff about the triad? (The “triad” is a shorthand for the three kinds of delivery systems for nuclear weapons: missiles, submarines and bombers.) Not only are all three aspects of the triad preserved in the treaty, the Nuclear Posture Review released this week explicitly preserves it. And, again, it commits the U.S. to deploying a missile defense system. All of this is public information available on the Internet.

It doesn’t make much sense, but then, it’s an election year. Making sense doesn’t pay well. I’d say that with perhaps the exception of a few rogues, the GOP party line on START is going to be about the same as it is on everything else: No.

Which reminds me: has Obama said whether he plans to submit this as a treaty, requiring 67 votes in the Senate for ratification, or an executive agreement, which only requires 60? I haven’t seen this discussed anywhere, but maybe I just missed it.