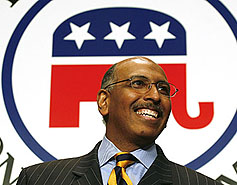 The treasurer of the Republican National Committee says that RNC chairman Michael Steele conspired to cover up their financial woes:

The Republican National Committee failed to report more than $7 million in debt to the Federal Election Commission in recent months — a move that made its bottom line appear healthier than it is heading into the midterm elections and that also raises the prospect of a hefty fine. In a memo to RNC budget committee members, RNC Treasurer Randy Pullen on Tuesday accused Chairman Michael S. Steele and his chief of staff, Michael Leavitt, of trying to conceal the information from him by ordering staff not to communicate with the treasurer — a charge RNC officials deny.

Mr. Pullen told the members that he had discovered $3.3 million in debt from April and $3.8 million from May, which he said had led him to file erroneous reports with the FEC. He amended the FEC filings Tuesday.

I love the smell of napalm in the morning.