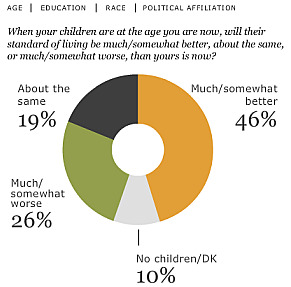 Peggy Noonan’s weekly attempts at sounding both deeply wise and gravely troubled have about the same effect on me as nails on a chalkboard, so I don’t usually read her columns. But I did today, and this passage struck me:

The country I was born into was a country that had existed steadily, for almost two centuries, as a nation in which everyone thought — wherever they were from, whatever their circumstances — that their children would have better lives than they did….Parents now fear something has stopped….They look around, follow the political stories and debates, and deep down they think their children will live in a more limited country, that jobs won’t be made at a great enough pace, that taxes — too many people in the cart, not enough pulling it — will dishearten them, that the effects of 30 years of a low, sad culture will leave the whole country messed up.

The reason it struck me is that I agree but — unsurprisingly — for an entirely different reason than Noonan’s. It’s not high taxes (which are lower than any time in recent history) or social changes (which have been overwhelmingly positive) that bother me, it’s the fact that we increasingly seem to be led by a social elite that’s simply lost interest in the good of the country. They were wealthy 30 years ago, they’ve gotten incomparably more wealthy since then, and yet they seem to care about little except amassing ever more wealth and endlessly scheming to reduce their tax burdens further. Shipping off our kids on a growing succession of costly foreign adventures is OK, but funding healthcare or unemployment benefits or economic stimulus in the midst of a world-historical recession is beyond the pale.

So yeah: when Noonan says of our political leaders, “I think their detachment from how normal people think is more dangerous and disturbing than it has been in the past,” I agree. But where she sees social breakdown and anomie, I see something more like the patrician thugocracy of Rome, dedicated to ever more sybaritic pleasures and blithely willing to suck the marrow out of the vast middle class in order to get it.

Apocalyptic? Yes! What’s more, Scott Winship says our entire premise is wrong: polling suggests that parents still think their kids will have it better than they do. He’s got a raft of polling results to back this up, and they roughly show that in good economic times parents are optimistic about their kids’ future and in bad times they’re pessimistic. Not exactly a startling result. And since we’re in the middle of some very bad economic times, the Pew result above, showing that only 46% of parents think their kids will be better off than they are, is unsurprising.

But Scott’s results only go back to the early 90s, and they bounce around a fair amount (the average seems to be around 55%). What I’m more curious about is what this looked like in the 50s, 60s, and 70s. Was optimism about our kids’ futures substantially higher then? Or has it bounced around at 55% during the entire postwar period? Any polling gurus out there know if there’s an outfit that’s been asking this question for a long time and has decade-long trends to show us?

UPDATE: I should probably be a little clearer here about what I myself think. Will our kids be better off than us? Almost certainly. Will they be a lot better off — as they should be given the likely economic growth of the next few decades? That I’m not so sure about.