I am, of course, thrilled to see conservatives beating each other senseless over earmark reform. They’ve spent years demagoguing Democrats over it, and the spectacle of Sen. James Inhofe now complaining that he’s being demagogued over earmarks is pretty priceless. Still, Inhofe makes an unassailable point: earmarks direct spending, they don’t increase it. 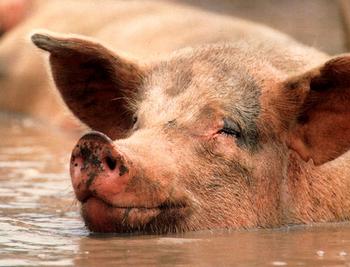 Actual overall appropriation levels are set separately, and earmarks merely take a bit of spending authority away from the federal bureaucracy and hand it directly to members of Congress. Over at The Corner, however, Stephen Spruiell offers a novel argument about why Inhofe is wrong:

Proponents of reform will readily concede that earmarks direct rather than add spending. But that is the problem: As long as powerful appropriators are getting to direct their share, they are less concerned with the overall size of the spending package. I think it’s fairly hard to dispute that point. The number of congressional earmarks doubled between 2001 and 2005, coinciding exactly with the years that congressional Republicans let non-defense discretionary spending grow at a rate not seen since the early seventies.

Senator Inhofe attempts to minimize the importance of this correlation by producing one of his own: “Over the course of the last several years, the overall number and dollar amount of earmarks has steadily decreased. During that same time, overall spending has ballooned by over $1.3 trillion.” Well, let’s just put it this way: Special inducements and temptations aren’t necessary to get a Democrat-controlled Congress signed up for more spending. The lesson of 2001 to 2005 is that earmarks hypnotize Republican majorities into spending like Democrats. Earmarks are our problem, not theirs.

“Earmarks hypnotize Republican majorities into spending like Democrats.” I love that. It’s yet another example of a creative conservative argument that never would have occurred to me. It also suggests that Republicans are really cheap dates. Apparently all it takes to get them to spend like drunken sailors is a few million dollars each in earmarks. That’s some party you have there, Stephen.

In any case, I don’t really have a dog in this fight. Giving members of Congress some limited amount of say over how money is spent in their districts actually seems defensible to me, as long as it’s public and transparent. On the other hand, the opportunities for mischief are pretty obvious too, so doing away with earmarks wouldn’t bother me much. What’s more, deep sixing earmarks entirely would have the salutary effect of (a) forcing alleged deficit hawks to talk about something a little more serious, and (b) putting an end to pretzel-bending arguments like Spruiell’s. Count me in, I guess.