Mitch McConnell, the Republican leader in the Senate, has made it clear that he considers hostage taking over the debt ceiling to be the new normal. From now on, Republicans are going to use the threat of default as a routine 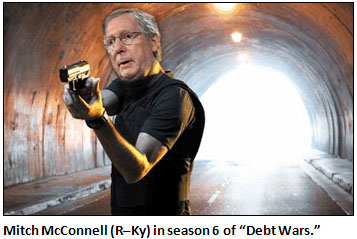 legislative maneuver. Michael Shear thinks Democrats should reciprocate and do the same when a Republican is president, but Jon Chait isn’t sure this will work:

As a practical matter, I doubt this. In order to hold the debt ceiling hostage, you need, at the very least, extremely high levels of party discipline (in the House and the Senate, lest the upper chamber openly break ranks and isolate your hostage-taking wing.) You also probably need a propaganda apparatus that can create its own empirical reality in which the experts who warn that failing to lift the debt ceiling would create dire consequences are all wrong. I don’t think the Democratic Party has either of these.

I’d add one more thing to this: what, exactly, would Democrats be holding out for if they did this? Republicans have an ideal topic: in return for raising the debt ceiling, we need to work on reducing the national debt. To a lot of voters, regardless of whether they approve, this at least makes sense. It seems natural, not artificial.

(Though Jon does offer an interesting twist: next time, maybe Dems should hold up the debt ceiling until Republicans agree to abolish the debt ceiling entirely. I don’t know if that would work either, but it’s an idea.)