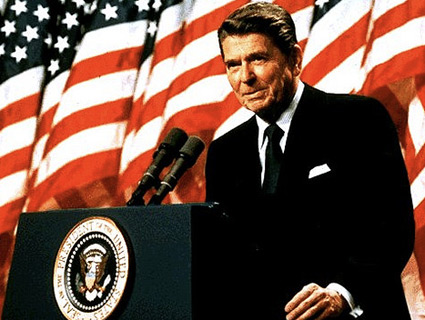 In the course of clearing her throat for an attack on Rick Perry Tuesday night, Michele Bachmann tossed out this now-standard bit of conservative boilerplate:

In the 1980s, Ronald Reagan produced an economic miracle…

It’s probably hopeless to take on the Reagan economic myth at this late date, but honestly, it’s long past time to put it to rest. The truth about the ’80s is far more prosaic: In 1979, Jimmy Carter appointed Paul Volcker chairman of the Federal Reserve. Inflation was running at about 12 percent when he took office, and Volcker immediately slammed on the monetary brakes in order to bring it down. Whether he was targeting interest rates or monetary aggregates remains a bit murky, but it hardly matters. In the end, he engineered one minor recession in 1980, and when that didn’t do the trick, he tightened Fed policy even more and threw the economy into a second recession—this one extraordinarily deep and painful—which he maintained until 1982. When he let up, the economy recovered. Reagan had very little to do with it.

But that’s not all. If you’re looking for other reasons that the 1980s were boom years, No. 2 would be oil prices. The American economy is highly sensitive to oil prices, and after peaking at around $100 per barrel during the Iranian revolution (in inflation adjusted terms), oil prices steadily dropped, falling below $30 in 1986 (again, in inflation adjusted terms). This was largely due to (a) reduced demand thanks to the recession; (b) reduced demand thanks to CAFE standards and other conservation/efficiency improvements that followed the oil shocks of the ’70s; (c) increased oil supply from Prudhoe 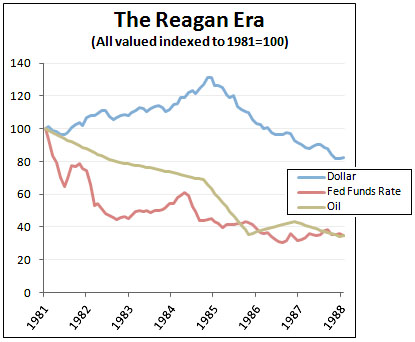 Bay, which peaked in the early ’80s; and (d) increased oil supply thanks to a Jimmy Carter executive order ending price controls on oil. Again, Ronald Reagan had very little to do with it.

What else? Well there was enormous deficit spending in the early ’80s that wasn’t offset by Fed action, and that probably stimulated the economy a bit. That was Reagan’s doing, though it’s not something his fans like to boast about today. And there was the Plaza Accord of 1985, which devalued the dollar and helped spur exports. That was also Reagan’s doing, but again, it’s not something his admirers say much about today, since modern tea party orthodoxy insists that this amounts to “debasing” the dollar. And finally, there are the 1981 tax cuts, which probably had a positive economic effect, but a fairly modest one.

That’s most of the story of the Reagan era. The most important economic drivers of recovery, in rough order of importance, were:

Other major Reagan policies were probably a wash. The tax reform act of 1986 was certainly a net positive, but sitting back and allowing the S&L crisis to spin out of control was a big net negative. But those are nits. In the end, although Reagan’s tax legacy is his most celebrated accomplishment, it was distinctly secondary to Fed policy, the oil glut, deficit spending, and a weak dollar. Lowering top marginal rates may or may not have been a great thing to do, but it was no miracle. The truth was far more mundane.