John Sides and Alex Lundry carried out an interesting polling experiment recently. First, they asked Republican voters who they preferred for president. The big winner was Newt Gingrich. Then they showed them InTrade probabilities of victory for each candidate:

Seeing these probabilities did make a difference: 35% of respondents changed their preferred candidate. The general election probabilities were particularly effective: about 40% of people 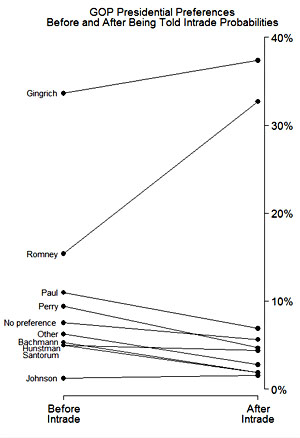 The chart on the right is a composite, showing what happened when voters were showed any of the InTrade probabilities. But Romney did even better among those who were showed only the general election probabilities:

Among those who saw only those probabilities, Romney led Gingrich, 36% to 29%….Romney benefited most when respondents were cued to think about electability in November 2012 and who is most likely to defeat Obama.

This is especially impressive since InTrade gives Romney only a modest general election advantage over Gingrich. But that was enough. Apparently, just getting people to think about electability is enough to produce a huge swing from Gingrich to Romney.

The sample size on this poll is fairly small, so don’t take the specific numbers super seriously. Still, the swing from Gingrich to Romney is big enough that it’s almost certainly for real. If Romney wants to win, his best bet is to pound daily on the idea that nominating Gingrich will just give Obama an easy ride to a second term.