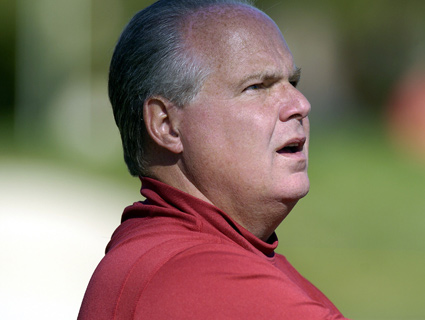 Bob Somerby points out today that Rush Limbaugh has been spewing bile for years. And yet, he says, “We liberals have been too lazy, too feckless, too ditto-headed to insist that big news orgs challenge Limbaugh.” So Limbaugh has mostly gotten away with it.

I don’t really buy Bob’s examples of supposed liberal fecklessness. They involve things like claiming that lower taxes will bring in more revenue, which has been conservative dogma for years. It’s also been the subject of relentless fights. Still, it’s true that Limbaugh has said terrible stuff in the past, but it’s only SlutGate that’s come close to generating a serious level of blowback against him. How come?

I don’t know. But I was reminded of a Suzy Khimm piece from a couple of weeks ago that asked a similar question about the proposed ultrasound law in Virginia, which also generated a tremendous amount of liberal protest:

What makes this all slightly surprising is that the Virginia law is not new. Twenty states have ultrasound-related abortion restrictions…So why is an old abortion restriction suddenly coming under fierce protest this time around? Analysts say that a new political landscape, coupled with a shift in abortion rights rhetoric, have allowed opponents to successfully push back against an abortion restriction that has passed with much less protest in a half-dozen other states.

….”In any of these contests, you need to get people passionate,” says Anna Esacove, a sociologist at Muhlenberg College who studies abortion politics. “Framing this as rape creates a passionate response for people who are against the laws. Even if people don’t think it’s rape, it gets people talking about it.”

….The messaging reminds some who have followed reproductive health politics of the antiabortion movement’s successful rhetoric in pursuing a ban on “Partial-Birth Abortion.”…”Partial-birth abortion was really a watershed in terms of rhetoric,” says Deana Rohlinger, a sociologist at Florida State University whose research focuses on social movements. “When the National Right to Life tested it, it just tested through the roof, and now it’s history.”

If this is right, it’s bad news for Bob, who’s consistently argued against the Foxification of the left and for a tough but fundamentally factual approach to fighting the modern right. But Suzy is suggesting that although the key to success in Virginia was partly better organization, it was mostly about using more incendiary language. Likewise, in the case of Rush, the key to success had nothing to do with his odious point of view. It was all because we could highlight a single word—”slut”—that enraged people.

I don’t know if this is correct. I’m just tossing it out for comment. But politics has always been about emotion, not cool logic, and maybe these two recent examples suggest that liberals are rediscovering that lesson. We’ll see.