Ezra Klein complains that tax jihadism is ruining us. Our inability to properly fund roads and highways is Exhibit A:

We used to have a straightforward way to fund infrastructure in this country: the federal gas tax. In 1956, President Dwight Eisenhower raised the tax from 1.5 cents a gallon to 3 cents to help pay for the creation of the interstate highway system. In 1959, he increased it from 3 cents to 4 cents. In 1982, President Ronald Reagan raised the gas tax to 9 cents. In 1990, President George H.W. Bush raised it to 14 cents, with half of the increase going to reduce the deficit. In 1993, President Bill Clinton raised it to 18.4 cents.

In 2005, the Bush administration joined with congressional Republicans to support a big transportation bill. But rather than raise the gas tax, the law just exhausted the Highway Trust Fund. In 2009, that law expired. Since then, Republicans and Democrats have failed to pass nine — nine! — short-term extensions, in large 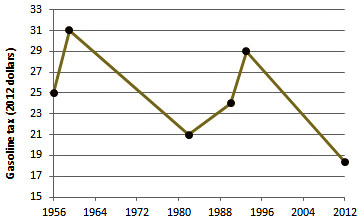 part because they can’t agree on how to fund infrastructure. But they do agree on one thing: Neither party intends to raise the gas tax.

Actually, as bad as Ezra makes this sound, he still doesn’t do it justice. It’s not that we used to have a bipartisan consenus to occasionally raise the gasoline tax. We used to have a bipartisan consensus to keep it at the same level. The chart on the right shows the evolution of the gasoline tax adjusted for inflation: back in 1956 Eisenhower set it at 25 cents in current dollars. Since then it’s bounced around within a few cents of that level all the way through the end of the 90s. And then it didn’t. Adjusting for inflation now counts as “raising” taxes, so the gasoline tax has steadily drifted down to 18 cents. And there’s no end in sight.

Recently, of course, this has been made even more acute by the fact that we’re driving less, which means we have both less gasoline to tax and a lower tax rate. Thanks to the tax jihadists, we’re not even willing to spend the same amount on infrastructure that we’ve spent for the past half century — through administrations both Republican and Democratic. We’d rather watch our country crumble away instead.