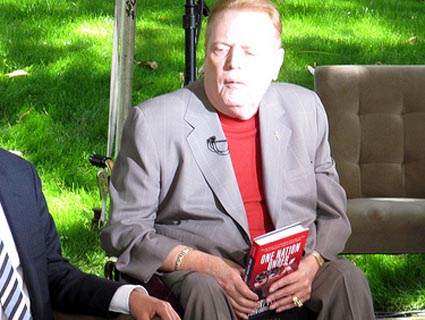 Hustler founder Larry Flynt at the LA Times festival of books in 2011.<a href="http://www.flickr.com/photos/waltarrrrr/5684024877/sizes/m/in/photostream/" target="_blank">Flickr/waltarrrr</a>

Conservative writer S.E. Cupp was recently the target of a sexist “parody” in Hustler magazine that I won’t describe here because it’s a family blog. Feminists, in response, have denounced Hustler for essentially telling Cupp that her proper role is as the object of sexual exploitation rather than a source of political commentary. Notably, Sandra Fluke, who was called a “slut” by Rush Limbaugh, tweeted that Hustler was trying to “limit [women] 2 being sexual figures & not more.”

While Hustler claims the picture is intended to be funny “satire,” it simply is not funny. It’s out of line, it’s sexist, and it’s an unacceptable form of misogyny. Women are under attack from all sides and no matter what political party you are in, I’m going to defend you from sexist attacks. I will not stand by in silence when a woman, any woman, is attacked in this way and belittled as nothing more than a sexual object. It’s about disagreement over ideas; smearing and demeaning women should not part of the equation.

There isn’t actually much difference between what Limbaugh was doing to Fluke and what Hustler did to Cupp. In both cases, the objective was to silence a women with contrary political views by insisting that they return to their proper place as objects of sexual desire for men. Conservatives objected to Limbaugh’s use of coarse language, but many agreed with his underlying argument in referring to Fluke as a “slut” and a “prostitute.”

That’s not the only difference: As Digby points out, the forceful condemnations of Hustler from feminist circles stand in contrast to the responses from the right to the Limbaugh/Fluke incident, where mild denounciations were paired with adamant insistence that, whatever Limbaugh said about Fluke, conservative women have it much worse. Conservative writer Michelle Malkin, herself a frequent target of sexist and racist vitriol on Twitter from critics (which is sadly often a byproduct of being a woman who writes stuff on the Internet) pointed out that there were other names Limbaugh could have called Fluke:

I’ll tell you why Rush was wrong. Young Sandra Fluke of Georgetown Law is not a “slut.” She’s a moocher and a tool of the Nanny State. She’s a poster girl for the rabid Planned Parenthood lobby and its eugenics-inspired foremothers.

The reason for the discrepancy here is rather simple: Whereas liberals view sexism as a societal problem that shapes how we live our lives, many conservatives view it as an issue of liberals using sexist rhetoric against conservative women. That’s why Malkin, a disciple of the “I know you are but what am I” school of political rhetoric, came up with the “war on conservative women” meme in response to Democratic rhetoric about Republicans “waging a war on women” by opposing access to contraception and holding up legislation like the Violence Against Women Act. This reflects a disciplined commitment to the Bender theory of discrimination: “This is the worst kind of discrimination: The kind against ME!”

Where conservatives look at the Hustler “parody” as indicative of liberal contempt for conservative women, feminists see a larger problem about how women are treated that affects everything from health insurance to how much you take home on your paycheck. To have condemned Limbaugh for his sexism in the same unconditional manner would have been a distraction, because the real problem isn’t sexism, it’s liberals. For feminists, sexism is the problem, period.