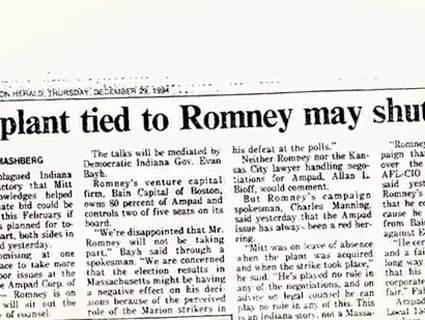 Cory Booker’s not alone. A number of other Democrats are criticizing the Obama campaign’s decision to attack Mitt Romney for his work at the private equity firm Bain Capital. Here’s former Tennessee Rep. Harold Ford:

“I think they’re very disappointing,” Rendell said of the ads attacking Bain. “I think Bain is fair game, because Romney has made it fair game. But I think how you examine it, the tone, what you say, is important as well.”

So what’s going on here? It seems to be a pretty straightforward case of Democrats not wanting to bite the hands that feed them. Josh Israel at Thinkprogress writes that Booker’s first mayoral campaign received large contributions from people who work for Bain and the financial services industry. Ford got Bain money, too—the firm is listed on Open Secrets as his sixth-largest contributor in 2006 cycle. Rendell also received sizeable contributions from the financial services industry. Overall, as my colleague Asawin Suebsaeng noted months ago, Bain Capital’s employees have given more to Democrats than Republicans. (Obama himself received a good chunk of change from Bain employees.)

Demonizing entire professsions is part of politics in the United States. Just ask a trial lawyer, a community organizer, or a Harvard professor. No one is above criticism obviously, but there’s something bizarre about watching high-profile Democrats wring their hands over criticism of private equity, particularly given the beating teachers and other public workers have received over the past three years for their alleged “greed.” Despite the alarming level of sensitivity over the feelings of financial services executives, private equity isn’t going anywhere, particularly not when the industry can afford to have such ardent defenders in both parties.