Dan Amira makes a point today about President Obama’s new tax proposal, and I’m trying to figure out if I think it’s mostly a pedantic complaint or one with real substance. You be the judge.

Basically, every news outlet in the country is reporting that Obama wants to extend the Bush tax cuts for those making under $250,000 per year. In fact, even Obama himself 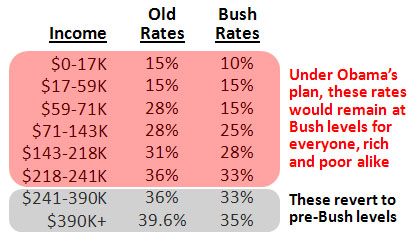 describes his own plan that way. But it’s not true.

What Obama is actually proposing is to retain the Bush rates on all income under $250,000. If you’re a middle-class wage slave, this applies to all your income. If you’re a Wall Street lawyer pulling down half a million per year, it applies to half your income. Everyone would have lower taxes than they did in the 90s. The table on the right shows how this would work. (The tax brackets are approximate and apply to married couples filing jointly.)

So the question is: what’s the best way to describe this? The Obama way (“keep the tax cuts for anyone making less than $250,000”) is more populist and a lot easier to understand. The technically correct way is more complicated, but it reduces the alleged class warfare angle a bit. Obama isn’t taking away all the tax cuts the rich got from Bush, just some of them.

So which is better? More populist or more centrist-y? Decisions, decisions…..