Jim Miklaszewski, NBC’s Pentagon correspondent, reports that in the aftermath of the insider attacks that killed six NATO troops yesterday, all joint U.S.-Afghan military operations have been suspended:

“We’re to the point now where we can’t trust these people,” a senior military official said. So far this year, 51 NATO troops have been killed in these so-called blue-on-green attacks.

“It’s had a major impact on our ability to conduct combat operations with them, and we’re going to have to back off to a certain degree,” the official said. The suspensions of the joint operations are indefinite — according to 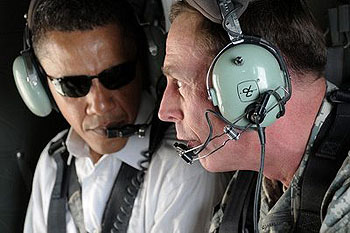 one official, they “could last three days or three months.”

If it’s three days, this might not be too big a deal. If it’s three months it’s a very big deal indeed. After all, Obama’s whole justification for doubling up in Afghanistan was to provide enough support to fight the Taliban and train Afghan troops at the same time. If the training isn’t working, then the whole plan isn’t working. Remember this conversation from Jonathan Alter’s The Promise?

Inside the Oval Office, Obama asked Petraeus, “David, tell me now. I want you to be honest with me. You can do this in 18 months?”

“Sir, I’m confident we can train and hand over to the ANA [Afghan National Army] in that time frame,” Petraeus replied.

“Good. No problem,” the president said. “If you can’t do the things you say you can in 18 months, then no one is going to suggest we stay, right?”

This was at the end of 2009. It’s been 30 months since then, and I think it’s pretty safe to say that our training of the ANA has not been a rousing success. And yet, we stay. Why?