Was last week’s unemployment drop a statistical fluke? There’s no way to say for sure, but I think the evidence suggests that it’s mostly quite real. Today, via Steve Benen, we get further confirmation of this: initial unemployment claims, which have been on a steady downward trajectory for the past two years, have dropped sharply over the past month, culminating in an unexpected drop of 30,000 in just the past week. The usual caveat applies: this is a noisy series and a single data point doesn’t prove anything. But this recent drop is in line with both September’s encouraging unemployment number as well as the overall trend of the past two years. Sorry, Jack. 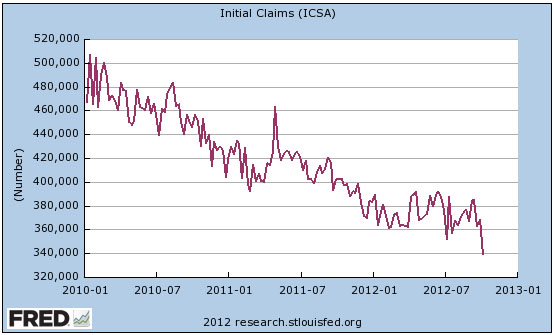