In the Washington Post a few days ago, Danielle Douglas reported that deposits in savings accounts have skyrocketed recently:

The total amount in those accounts climbed nearly 5 percent to $6.9 trillion in the spring, the highest level recorded since the Federal Reserve launched its regular reports on the flow of money in the economy in 1945. At the same time, other data show that Americans are fleeing the stock market and avoiding the purchase of new homes.

Dean Baker is not happy:

The problem with the article is that people actually are not saving excessively…. This is not a debatable point where we will have Keynesians giving one line and conservative economists giving another. This is data 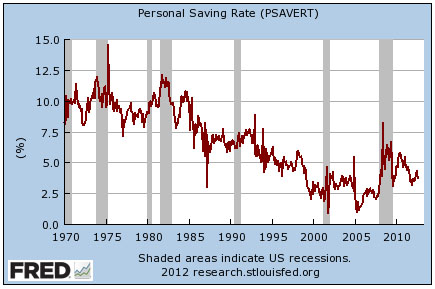 that is available to anyone who takes a moment to look at the Commerce Department’s website.

….Unfortunately, the Post is not alone in this confusion. There are many accounts in the business press about consumers holding back as a result of concern about the state of the economy. The same is frequently claimed about investment….But if we look at the data from the Commerce Department, investment in equipment and software is almost back to its pre-recession level….Given the huge amounts of excess capacity in many sectors, this is actually an impressive level of investment. This is certainly not consistent with the story of firms who are hoarding cash and scared to go out on a limb.

….If we look at the data on the volume of existing home sales, the recent annual rate of 4.8 million is more than 20% above the 3.9 million average of 1993-1995, the last years before bubble-generated exuberance began to drive sales. The same story applies to house prices. Inflation-adjusted house prices are even with or above their long-term trend, according to the Case-Shiller national index.

….These basic, irrefutable facts are absolutely central to our understanding of the economy — yet most public debate starts from premises that are completely wrong on these and other issues.

I’d add to this that the percentage of Americans with investments in the stock market has been declining for a decade. This might have something to do with the economy, but more likely has to do with demographic trends. The usual advice given to ordinary people is to reduce their holdings of volatile securities as they age, and as the Baby Boomers have aged they’ve done exactly that. We should probably expect this trend to continue for some time.

In any case, Dean is right: there’s plenty to argue about on the economic front, but basic economic data isn’t part of it. This stuff is pretty easily available, after all. The personal savings rate is currently hovering around 4%, roughly the same as it’s been for the past 15 years. Businesses are investing, and home prices are back at their historical trend level. “This matters hugely,” says Dean, “because there is no possibility of changing policy if people don’t have a clue as to the nature of the economy’s current problems and how policy could be changed to make things better. In this sense, the confusion hugely benefits the elites. After all, they are fat and happy.”

Indeed. It’s too bad his piece was published across the Atlantic in the Guardian, instead of in the Washington Post, where it belonged.