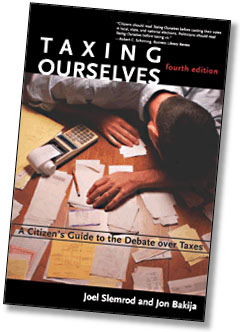 A recent study of Danish savers suggests that tax breaks for retirement accounts have almost no effect on the amount people sock away for their golden years. This doesn’t surprise me, since I read Joel Slemrod and Jon Bakija’s Taxing Ourselves a long time ago (highly recommended!), and they told me the same thing. Nearly every study, they said, agrees that “any response of the saving rate to the incentive effect of a higher after-tax rate of return is likely to be fairly small.” As for IRAs, they act as “a reward, but not an inducement, for saving.” Andrew Sprung puts this into personal terms:

My wife and I are savers….Since the late ’90s I’ve had the kind of solo retirement accounts allowed to the self-employed….I am always acutely conscious that a large chunk of every allowable dollar that I fail to contribute goes to taxes — avoidably. So I come as close to maxing out as I can. I’ve always assumed that this a good thing — that this incentive is working as it should.

What dawned on me after reading about this study, which focused on Danish savers since reams of detailed data are available there, was that the incentive doesn’t really shape how much I save — it just controls where I put it.

….About 90% of our savings, excluding home equity, is in retirement accounts. That’s not good. Or rather, it’s only “good” if you assume that it’s in the natural order of things for retirement funds to be especially privileged….What the Danish study tells me is that all savings should be equal, and all citizens should be able to avail themselves of the same limited tax credits to save. And oh yes, we should be free to put those tax-protected savings into whatever investment vehicles we choose.

That makes sense. There’s probably some incentive effect at work—though in 401(k)s it’s most likely the employer match that’s doing the heavy lifting—but for the most part these vehicles are used by people who’d be saving regardless. Virtually all of the benefit ends up going to the upper middle class and the wealthy, who generally don’t need much of an incentive to build up savings.

I don’t really have anything against tax-advantaged retirement plans. You won’t see it becoming a hobbyhorse here. Still, it’s worth knowing that this is a tax expenditure that costs a lot of money without really accomplishing much of anything.