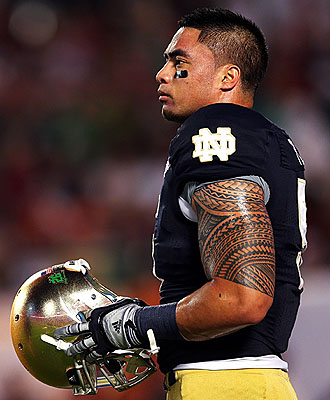 The sports world is all atwitter over the revelation that Manti Te’o’s girlfriend, Lennay Kekua, has turned out to be a hoax. The two didn’t meet after Notre Dame lost to Stanford in 2009, they didn’t get together occasionally when Kekua visited Hawaii, and Kekua didn’t die of leukemia the same week as Te’o’s grandmother. She never even existed.

There are, needless to say, questions galore about this, and I look forward to the media frenzy over it. But this I don’t really get:

The revelation that Kekua had never actually lived, let alone died, has stunned a nation and a sporting press that had blithely reported details of their relationship for months on end. Many are now angry at the media. “Nobody asked: who is she? Where did she live? Not one reporter dug deep. The lack of legwork is a total surprise to me,” said Frank Shorr, a sports and journalism expert at Boston University.

Well….OK. But come on. Reporters don’t go into cynical investigative mode when a football player tells sappy stories about his girlfriend. Why would they? Not only would it be kind of creepy, but there’s simply no reason to suspect any kind of foul play. I mean, who lies about stuff like this? Nobody. So why would anyone ever be skeptical enough to start digging into it? This is a football player’s girlfriend, not the president of the United States saying he had nothing to do with that botched burglary over at the Watergate.

I think the press gets a pass on this. You’d have to be a little deranged to think about investigating something like this. It’s not even slightly surprising to me that no one ever did.

UPDATE: Hmmm. More here from SI’s Pete Thamel, who wrote a cover story about Te’o on short deadline a few months ago. I’m not sure whether this changes my mind or confirms it. Either way, this is one damn peculiar story.