I’m not a fundamentals absolutist. That is to say, I don’t believe that presidential elections are won and lost based on the state of the economy and not much else. Still, fundamentals play a huge role, and Larry Bartels reminds us today that despite all the hue and cry about how Obama won 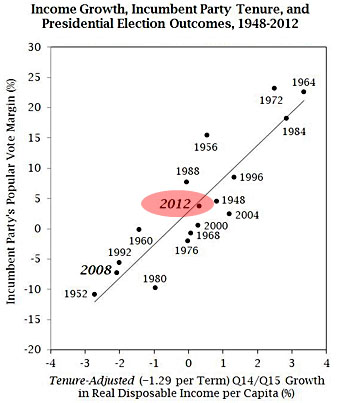 despite a lousy economy, he actually did about as well as you’d expect a one-term incumbent to do with the economy he had:

We have lots of distinct but broadly consistent statistical analyses of presidential election outcomes. My own favorite is based on just two factors: the income growth rate in the second and third quarters of the election year and the incumbent party’s tenure in office.

…. The 2012 election outcome []  fits the historical pattern of post-war presidential election results splendidly; Obama’s popular vote margin was 3.8%, while his expected margin (based on the preliminary tabulations of real disposable income currently available from the Bureau of Economic Analysis) was 4.6%.

….Anyone who wants to believe that Obama’s “formidable campaign” (or whatever) won him more votes than an ordinary campaign would have won should feel free to do so, but should be required to propose some equally plausible source(s) of vote losses to balance the ledger.

Bartels’ regression line is based on a simple formula that takes into account two things: number of years in office and the growth of real disposable income per capita between Q1 and Q3 of the election year. Income growth this year between Q1 and Q3 was about 0.3 percent, and when you plug that into his formula you get a prediction that Obama would win the election by 4.6 percentage points. Read his whole post for all the usual caveats and warnings.

In comments, Bartels notes that one implication of this formula is that “events before the start of the election year have no effect, for better or worse.” This isn’t quite true, of course. The real implication is that presidents should do anything they can to make sure the economy is on an upward trajectory in the fourth year of their term. Income growth doesn’t come out of the blue, after all. Conversely, the out party should do everything it can to sabotage the economy. If Republican obstructionism had managed to shave another point or so off the growth rate, Mitt Romney might have won.