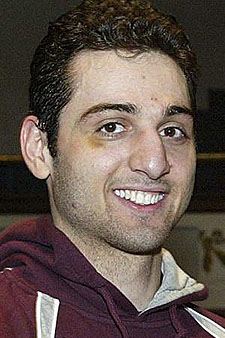 Andrew Sullivan argues that the Boston bombings orchestrated by Tamerlan Tsarnaev were clearly an act of Islamic jihad:

One reason the Miranda rights issue is not that salient is that the evidence that this dude bombed innocents, played a role in shooting a cop, shutting down a city, and terrorizing people for a week is overwhelming and on tape. And yes, of course, this decision to commit horrific crimes may be due in part to “some combination of mental illness, societal alienation, or other form of internal instability and rage that is apolitical in nature.” But to dismiss the overwhelming evidence that this was also religiously motivated — a trail that now includes a rant against his own imam for honoring Martin Luther King Jr. because he was not a Muslim — is to be blind to an almost text-book case of Jihadist radicalization, most likely in the US.

….We see the sexual puritanism of the neurotically fundamentalist. We have his YouTube page and the comments he made in the photography portfolio. To state today that we really still have no idea what motivated him and that rushing toward the word Jihadist is some form of Islamophobia seems completely bizarre to me.

We don’t know yet. Yes, there’s plainly evidence of his growing Islamic extremism over the past three years. But if there’s anything we’ve learned over the last week, it’s that jumping to conclusions on this stuff is foolish. Our natural curiosity isn’t a good enough reason to rush to judgment about Tsarnaev’s motivations. Just wait. There’s no harm in it. We’ll find out soon enough.