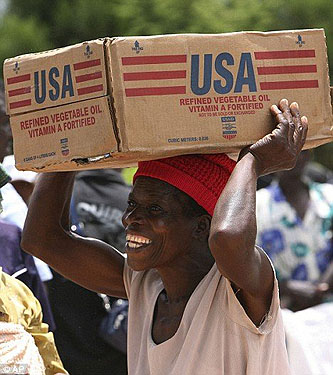 The quickest and most effective thing to do would be to find some farmer or group of farmers in other parts of the country, or in neighboring countries, buy their food and get it to the stricken area. After all, one key cause of famine is the lack of money, not lack of crops. But under current law, USAID is basically forbidden from doing that. Instead, it must buy grain in the United States and ship it several thousand miles to the famine area. You can imagine the amount of time that that takes; sometimes, several weeks. it’s a logistic nightmare. In the meantime, thousands die, usually the weakest such as children and the elderly.

But it’s worse than that.

If the food needs to be shipped, then that means that the shipping must be paid for. And it sure is: according to a study done by AJWS and Oxfam, nearly 55% of the cost of American international food aid goes not to food, but to shipping costs. That’s what your tax dollars are going to.

But it’s worse than that.

There are three more repetitions of “it’s worse than that” after those two, so read the whole post to see just how bad things are. Needless to say, the reason for this grim state of affairs is that instead of treating food aid as a way to help people who are starving, it’s basically treated as a big slush bucket for American farmers. But it would be far more sensible to buy food near the point of famine when possible, so the White House has proposed doing just that. The New York Times reports the unsurprising results:

An Obama administration plan to change the way the United States distributes its international food aid has touched off an intense lobbying campaign by a coalition of shipping companies, agribusiness and charitable groups who say the change will harm the nation’s economy and hamper efforts to fight global hunger.

….Twenty-one senators from farm states also wrote to the Obama administration last month, after being lobbied by the groups, asking that the food aid program be kept in its current form.

As Zasloff points out, even the executive director of the American Maritime Congress, who can probably be trusted to exaggerate the figures as much as possible, claims only that the proposed changes would cost “hundreds” of jobs. Hundreds! As for actual charities, only one is quoted opposing the changes in the Times article, and its opposition is based solely on the fear that Congress would lose interest in overseas charity completely if most of the money were actually used for aid instead of paying off special interests.

In theory, this should be a bipartisan winner. The Bush administration wanted to do it, and now the Obama administration wants to do it. It would be a far more efficient use of taxpayer dollars, and it would allow U.S. aid to help far more people. It’s a slam dunk. Call your congress critter today and tell them, for once in their benighted careers, to just suck it up and do the right thing.