Matthew Drudge reports today that panic is everywhere in the world of gold bugs. And sure enough, after drifting downward from $1,800 to $1,550 over the past six months, gold has plummeted another $200 over the past two days. Paul Krugman feels vindicated:

As Joe Weisenthal says, this should be seen as really good news, because it offers strong evidence that the goldbug/inflationista view of the world — which says that we need to stop all 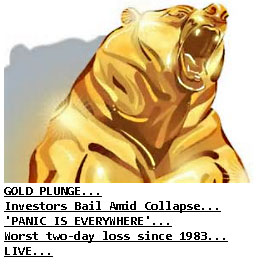 efforts at monetary and fiscal stimulus lest we turn into Weimar — is, in fact, all wrong.

I don’t follow the gold market at all, but the interesting aspect of this to me is: what about China and India? My hazy understanding of the rise in gold prices over the past decade has been that increased demand in those two countries was a far more important factor than speculative fever among tea party types in the U.S. So if the price has dropped by a quarter over the past half year, it must have something to do with decreased demand in China and India. And sure enough, when I click on today’s story about gold in the Wall Street Journal, here’s what it tells me:

Worries are spreading that Asian buying, which has helped prop up gold prices for years, may slow. China reported that its economy unexpectedly slowed last quarter, spurring fears that Chinese consumers, faced with less cash, could stop purchases. In India, the largest gold industry group warned that the country is losing confidence in the metal because of its recent slide. Investors in Europe cashed out of gold en masse amid concerns that U.S. stimulus may come to an end earlier than expected, and following news that Cyprus may sell a chunk of its gold reserves to fund part of its bailout package.

It’s still not clear exactly what’s going on. If this report is right, there are merely fears that Chinese consumers “could” reduce their gold buying, and Indian purchasers are said to be reacting to gold’s recent slide, not causing it.

Still, I think that somehow China and India ought to be the focus of explanations about gold’s slide. Obviously, a bubble mentality can take over once a price drop has continued for a while, but the original source needs to be reduced demand. And that points to the other side of the Pacific Ocean.