I was chatting with a friend last night about the breakdown of governing norms in American politics. You know the drill: routine filibusters, mid-decade redistricting, flat refusals to allow votes on executive appointments, etc. But now there’s a new one on the scene. It’s a little more subtle than the others, though, so permit me an analogy.

If I ask my neighbor for a cup of sugar and he tells me to get lost, everyone agrees that he’s being a dick. Under our usual social norms, that’s a pretty reasonable kind of favor to ask. On the other hand, if I ask him to give me his car because I totaled mine, everyone agrees that I’m the one being unreasonable. That goes well beyond the kind of favor you’d normally expect from a neighbor.

The problem with this norm is that it’s not really provable. Is asking for a cup of sugar really a reasonable request? Says who? Conversely, why can’t I have your car? I say that’s perfectly reasonable. Sometimes stuff like this ends up in court, but for the most part we rely on a social norm of reasonableness to adjudicate things like this. It’s the only practical way to keep society humming along.

But this is the latest norm to go down for the count in Washington DC. House Republicans have decided to issue a laundry list of demands in return for raising the debt ceiling that go way, way beyond the usual bargaining norms of Washington. If they had proposed, say, a cut in SNAP funding, 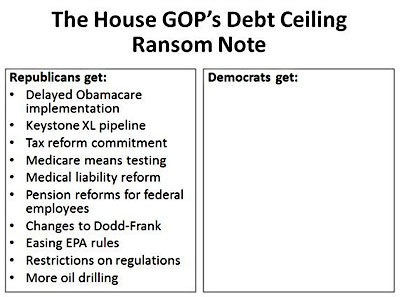 that would be politics as usual, to be fought along the usual lines. But demanding the elimination of a historic piece of social welfare legislation? Or the absurd ransom note on the right, courtesy of Steve Benen? That’s just not the same thing and everyone knows it. Unfortunately, the norms of the press don’t really allow them to say that. So you get story after story about all the previous government shutdowns, or about the various hobbyhorses that have been attached to debt ceiling legislation in the past, with the strong implication that, really, what’s happening today isn’t all that unusual.

It is, though, and everyone knows it perfectly well. But you can’t prove it. So reporters end up in he-said-she-said mode and the public ends up evenly divided about whether Republicans are bargaining in good faith.

And with that, yet another governing norm is on life support. The problem is that in any complex culture, norms are every bit as important as formal rules—something that, in other contexts, conservatives harangue us about constantly. They should think a little harder about why they feel that way as they go about their business of blowing up Capitol Hill. There might actually be a good reason that all these norms have evolved organically over the past couple of centuries.