Tyler Cowen points today to a story from a few months back about cuts in benefits to workers at North Korea’s Kaesong Industrial Complex:

Due to financial difficulties at Kaesong caused by the complex’s five-month halt in operations…the number of Choco Pies distributed will be reduced and North Korean workers — known to resell Choco Pies on the black market for a considerable profit — will have a major source of income cut. 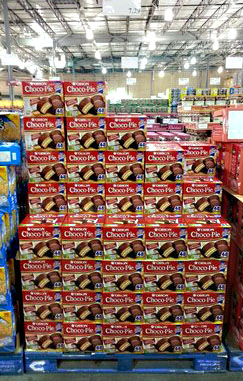 each worker to $0.20 worth of snacks a day, the workers will receive a maximum of two Choco Pies.

Choco Pies. Can anyone explain Choco Pies to me?1 Here in Irvine we have lots of Asian supermarkets, and every one of them features enormous floor stacks of Choco Pies. Not just during certain holidays, and not just during special promotions. All the supermarkets. All the time. And judging from the selection of other sweets in these stores, Choco Pies must account for upwards of half of their sweet sales.

There’s no American equivalent I can think of. It would be as if every supermarket greeted its customers with a gigantic display of, say, Snickers bars, which accounted for 50 percent of all candy bar sales.

I bought a box of Choco Pies once. They were OK, but it was hard to see anything special about them. So what’s up? Is this just one of those particular cultural things for which there’s no real explanation? Or is there some fascinating historical reason for the immense popularity of Choco Pies among Koreans? Anyone know?

1Not among North Koreans, of course. That’s just a hook for this post. Their black market value in a place like North Korea is pretty obvious.