Yesterday lifelong political junkie George Packer reluctantly confessed something: “It might not be wise for a sometime political journalist to admit this, but the 2016 campaign doesn’t seem like fun to me.”

Ed Kilgore and Dylan Byers both took issue with this. In a nutshell, Kilgore thinks 2016 will be a fairly consequential election and the horse race will be fairly unpredictable, while Byers thinks the horse race 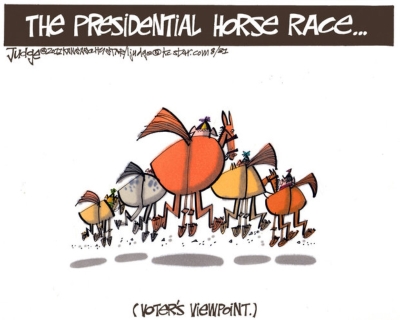 will have as many twists and turns as usual. Lots of fun for everyone!

I’m a bit of an odd duck on this subject: a daily blogger and political junkie who has only a slight interest in the campaigns themselves. I have some interest, and I usually end up writing plenty of campaign posts, but it mostly seems like uninteresting kabuki to me. Candidates are so thoroughly media trained these days that you mostly know what they’re going to say before they open their mouths. “Gaffes” are seldom more than slightly ambiguous extemporaneous constructions that the media plays along with either out of boredom or a desire to seem like they’re not playing favorites. All the marketing minutiae of ad buys and demos and GOTV innovations is interesting in an academic sense, but it hardly seems to matter much in the face of overwhelming evidence that a few basic fundamentals decide the race months before Election Day. And the tired and almost childish obsession of the press corps with dumb adherence to narratives and personalities is enough to make any serious reader scream.

But these aren’t really Packer’s main beefs with presidential campaigns. This is:

The reason is the stuckness of American politics. Especially in the years after 2008, the worst tendencies of American politics only hardened, while remaining in the same place. Beneath the surface froth and churn, we are paralyzed. You can sense it as soon as you step out of the train at Union Station in Washington, the instant you click on a Politico article about a candidates’ forum in Iowa: miasma settles over your central nervous system and you start to go numb. What has happened is that the same things keep happening. The tidal wave of money keeps happening, the trivialization of coverage keeps happening, the extremism of the Republican Party keeps happening (Ted Cruz: abolish the I.R.S.; Rand Paul: the Common Core is “un-American”). The issues remain huge and urgent: inequality, global warming, immigration, poorly educated children, American decline, radical Islamism. But the language of politics stays the same, and it is a dead language. The notion that answers will come from Washington or the campaign trail is beyond far-fetched.

This is it, and it’s a common complaint. Both parties are stuck in the same sound bites; neither is willing to seriously compromise; and given the structure of the US government it’s vanishingly unlikely that either party can get much of anything done. Tax policy can be changed via reconciliation, and Barack Obama had a short window where he got some things done via a huge Democratic majority in the Senate. Neither party is likely to replicate that in the near future. Likewise, for all the sound and fury, the differences between mainstream Democratic and Republican foreign policy have become pretty narrow since George Bush’s Iraq debacle.

As Packer says, American politics is stuck. It’s paralyzed. Exhibit 1: We’ve just witnessed a historically unprecedented delay in confirming an Attorney General that everyone agrees is eminently qualified. Why? Because of a bit of clever Republican gameplaying over an abortion clause that was fundamentally trivial but great red meat for the base. When the Democratic base finally cottoned on to the game, they went predictably ballistic and everything stalled. It was all just dumb kabuki: gameplaying from Republicans, predictable outrage from Democrats, and all over a long accepted principle that bans federal funding of abortion. Two months of gridlock over trivial symbolism. And why not? Everyone knows there was nothing important that had any chance of getting done anyway.

So yeah: unless you’re a horse race junkie by nature, it’s pretty hard to get excited by the horse race when it has almost no chance of changing things except on the margins. This will change eventually, but probably no time soon.