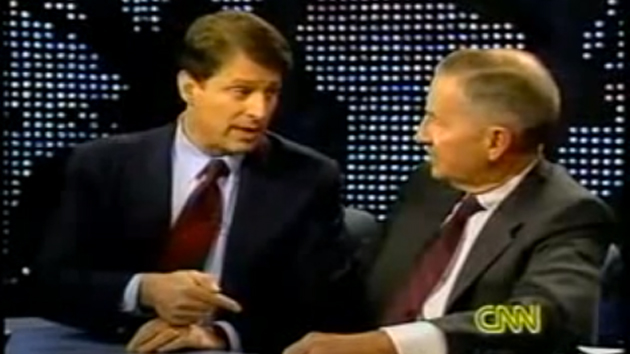 While Kevin Drum is focused on getting better, we’ve invited some of the remarkable writers and thinkers who have traded links and ideas with him from Blogosphere 1.0 to this day to contribute posts and keep the conversation going. Today we’re honored to present a post from David Dayen, a veteran blogger and currently a regular contributor to Salon and The Fiscal Times, among other publications.

I was planning on commandeering Kevin’s site to finally shape this place up and do some dogblogging, but management was, shall we say, unreceptive. So let’s use this space to do what all great blogging is known for: pointless speculation!

I did a story for The New Republic looking back at the 1993 CNN debate between Al Gore and Ross Perot, showing how Gore’s messages on selling NAFTA mirror Barack Obama’s messages on selling the Trans-Pacific Partnership today. Both men claim that their progressive trade agreements differ from the raw deals of the past; that opponents were isolationist Luddites who want to return to some unrealistic pre-globalized world; and that this new deal would create a benchmark for global trade, which some Asian power (Japan or China, depending on the era) would take control of were their plan defeated.

But the debate itself is amazing for several reasons, not the least of which being that a sitting Vice President had to go on Larry King and take phone calls. Everyone remembers Perot saying “Can I finish” incessantly, so much so that it became a Dana Carvey tag line.  And maybe you remember Gore pulling out a picture of Smoot and Hawley and giving it to Perot as a present (“You can put it on your wall”). But come with me through this Internet rabbit hole and look at something else.

Ross Perot gets asked four questions from the phone lines. I have no knowledge about how they were screened. But these don’t sound like regular people to me; they sound like plants. You can listen yourself:

43:45 The caller is from “Washington, DC.” And he says, and I quote, “How can the US expect to compete on a long-term basis in an increasingly interdependent economic world, while Europe and the PacRim nations unite on their own respective trade alliance?” Who in the world talks like that? It reads like it came out of a Brookings Institution paper.

54:30 A expat caller from Zagreb, Croatia (!) asks Perot for specific answers on what he would do as an alternative to NAFTA. This happens to be a question Gore asked repeatedly throughout the debate.

1:01:35 This call comes from McLean, Virginia, the Washington suburb populated mostly by lobbyists. The caller coincidentally has statistics at the ready on electronic exports to Mexico (“nearly tripled” over the past five years, “worth about $6 billion), and demands that Perot agree that removing tariffs on these products will produce “high-tech, good-paying jobs” in America.

1:06:35 This is perhaps the weirdest call. An American woman “who has been living in Mexico City for many years” calls in, following up on Gore’s claim that the Japanese would “take over” a free trade agreement with Mexico if NAFTA is defeated. “There are thousands of Japanese here. They are waiting. They are lurking! What are you people doing? Why-” At this point she gets cut off, but Gore repeats the question and adds a line the caller never said: “Why don’t you wake up?”

This is weird. The questions not only sound way too hyper-informed and scripted, they dovetail with every talking point Gore used in the debate, from how passing NAFTA was critical to setting a benchmark for trade with the world, to how NAFTA would create jobs at home through rising exports to Mexico, to how Japan loomed to take advantage of any potential failure, to how Perot was just carping from the sidelines without his own plan.

It’s a strong accusation to suggest these questions were planted, and honestly I have no idea. However, I did find an article from 1994 in some left-wing rag called Mother Jones, detailing a host of dirty tricks the Clinton Administration engaged in to blunt the influence of Ross Perot:

Last September 2, the day Perot was to appear on Jay Leno’s “Tonight Show,” a White House adviser got on the horn to L.A. After chatting with a “Tonight Show” writer, he faxed some questions to Leno […]

(Perot co-author) Pat Choate claims the administration sent people to UWS rallies to “take notes” and “heckle” Perot. He also accuses the administration of manipulating the press: “Journalists are getting anti-Perot stuff in the mail,” he says. “Most of it has no return address.” (Several reporters who cover Perot say they have no knowledge of this, and the White House denies both charges.) […]

Last April 22, Perot appeared before the Senate Banking Committee to testify on NAFTA. The White House didn’t like him testifying, and it liked even less the idea of C-Span televising his appearance. So, Choate claims, a White House aide called Senate Majority Leader George Mitchell, who called Brian Lamb, the chairman of C-Span. Some sort of deal was struck, and Perot’s testimony never graced the airwaves.

Because Mother Jones is a responsible publication, the author added that the rumor about C-SPAN could be false, but that it showed how the Clinton White House seized on Perot’s natural paranoia to undermine him in the trade debate. Throwing in suspicious-sounding questions on CNN could serve the same purpose.

We’re 22 years on from this event, and investigating the provenance of these fishy phone calls would be somewhat irrelevant. Four phone calls were not the reason NAFTA passed; there’s no “NAFTA-ghazi” conspiracy theory to be had. But I nevertheless find it fascinating. Has anyone ever studied this? Does it just sound odd to my modern ears, or is there more there? When Kevin Drum ends blog posts with a series of questions, is it a clever device or does he genuinely want to ask his audience for answers?