Crime has increased significantly in Baltimore since the Freddie Gray funeral. Police say it’s because of a spike in drug gang warfare. But it also appears to be a result of a deliberate pullback by police officers who are angry at seeing their own members indicted for Gray’s 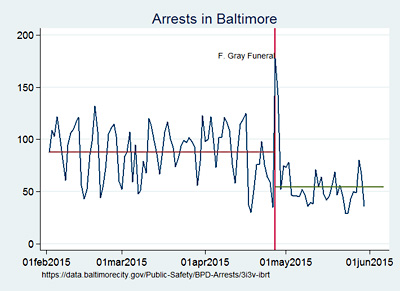 death. Alex Tabarrok produces the chart on the right that illustrates the sudden drop in arrests right at the time of Gray’s funeral and the indictments of the officers a few days later.

Is this drop legitimate, because it now takes more officers to handle a single incident? Or is it the drug war? Or is it a deliberate attempt by police to slow down, work to rule, and create a vivid demonstration of what happens when you mess with the thin blue line? I don’t know, but when you look at the sharp line on that chart it’s hard not to think the latter is part of it, just as we’ve seen before in Ferguson and New York City. And the more of these petulant outbreaks we see, the harder it gets to sympathize with the police. Much harder. Tabarrok also fears a possible long term problem:

With luck the crime wave will subside quickly but the longer-term fear is that the increase in crime could push arrest and clearance rates down so far that the increase in crime becomes self-fulfilling. The higher crime rate itself generates the lower punishment that supports the higher crime rate….Once the high-crime equilibrium is entered it may be very difficult to exit without a lot of resources that Baltimore doesn’t have. I have long argued that high-crime areas need more police but the tragedy is that they also need high-quality policing and that too is made more difficult to achieve by strained budgets and strained police.

Stay tuned. The police slowdown is a dangerous and juvenile tactic that could backfire very easily if it keeps up. That would be bad for Baltimore and bad for the Baltimore PD.