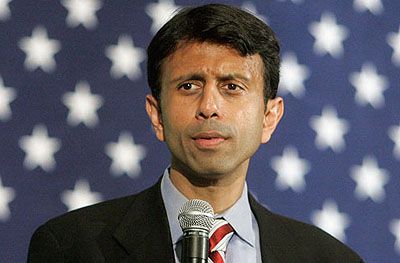 After three courts told him he had to, Louisiana governor Bobby Jindal will finally allow his administration to issue marriage licenses to same-sex couples today.

….Jindal’s administration argued it’s possible the Supreme Court’s ruling didn’t apply to the Fifth Circuit Court of Appeals, where Louisiana had been defending its statewide ban….On Wednesday, the circuit court actually went through the motion of confirming the Supreme Court has jurisdiction over it.

….But Jindal’s administration jumped on that as reason to delay even further. The Fifth Circuit technically sent the case back to the lower, district court where its earlier ruling in favor of the state had to be corrected. The New Orleans Times-Picayune reported that Jindal’s spokesman said no same-sex couple would be recognized until the district court formally reversed itself. And so it did that today.”

I’ve seen several people wondering why Jindal wasted time with this, since he knew perfectly well what the outcome would be. The answer is obvious: He’s trying to position himself as the most tea-partyish, most anti-Obama, most combative conservative in the Republican field. So this is basically brand marketing. Republican voters now know that no one will stand up for traditional values as strongly as Bobby Jindal. Message sent and received.