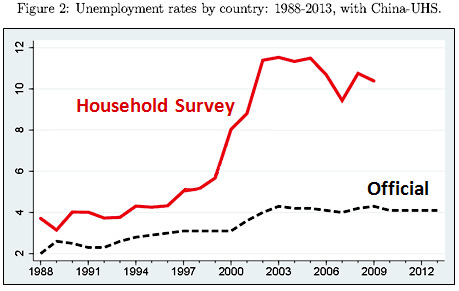 A new NBER paper calls this “abnormally low and suspiciously stable,” which seems like a fair judgment. So the authors, their suspicions piqued, used a nationally representative household survey to calculate the actual unemployment rate. Unsurprisingly, it turns out to differ substantially from 4.1 percent. The chart above (modified from the paper to show the two series more clearly) shows data through 2009, which is as far as the household series goes. The actual unemployment rate has been above 10 percent ever since 2002, and is likely even higher than that now, given the sputtering economic problems in China.

“Keep an eye on China and don’t be surprised by the unexpected,” says Alex Tabarrok. “In China it’s not just the unemployment rate that is more volatile than it appears.”