Following the terrorist attacks in Paris, conservatives are eagerly taking the opportunity to accuse Barack Obama and Hillary Clinton of fecklessness and appeasement for not taking a harder line against ISIS. We need someone with the guts to lead, and who isn’t afraid to use the term radical Islam. Apparently that’s important.

Maybe so. But ground troops are the only way to destroy ISIS in the short term, and the Republican presidential candidates have all been oddly reluctant to get behind a serious American invasion force. So before we allow them to get too 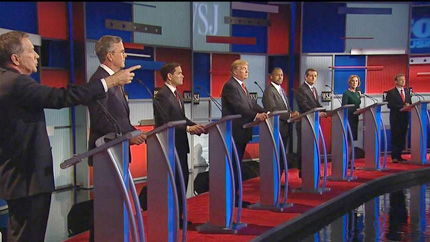 far up on their high horses about how tough they’d be, here’s a reminder of what they were saying about ISIS before two days ago.

Donald Trump wants to take away oil fields controlled by ISIS, but has explicitly dodged the question of whether he would use a substantial ground force to do it. His preference is for an air campaign: “I would just bomb those suckers. That’s right. I’d blow up the pipes. I’d blow up every single inch. There would be nothing left.”

Jeb Bush has previously ruled out a “major commitment” of ground troops. He would support a modest increase in “supportive” troops, and wants to unite the moderate anti-Assad forces in Syria. But he also thinks Trump is crazy.

From the debate: “Let ISIS take out Assad, and then Putin will take out ISIS?….That’s not how the real world works. We have to lead, we have to be involved. We should have a no fly zone in Syria.“

Carly Fiorina has specifically said ground troops are unnecessary. Our allies should provide any troops necessary.

From the debate: “We must have a no fly zone in Syria….We also have a set of allies in the Arab Middle East that know that ISIS is their fight….King Abdullah of Jordan….The Egyptians, the Saudis, the Kuwaitis, the Bahrainis, the Emirati, the Kurds….They must see leadership support and resolve from the United States of America.”

Marco Rubio said last year the he would like to see a permanent US presence in the Middle East. “I’m not saying 100,000 troops, but certainly some level that allows us to project power quickly and confront challenges and threats.” More recently, he’s backed off that position: “ISIS is a radical Sunni Islamic group. They need to be defeated on the ground by a Sunni military force with air support from the United States.” And this: “Intervening doesn’t mean ground troops. Intervening can be a lot of things.” His official position on his website specifically recommends air strikes, special ops, training, arms for Sunni and Kurdish forces, diplomacy, financial targeting, and better PR. It does not mention ground troops.

Ben Carson has suggested that ground troops “might” be necessary, but has declined to go any further.

From the debate: “We’re talking about global jihadists….We have to destroy their caliphate. And you look for the easiest place to do that? It would be in Iraq. Outside of Anbar in Iraq, there’s a big energy field. Take that from them. Take all of that land from them. We could do that, I believe, fairly easily, I’ve learned from talking to several generals, and then you move on from there.”

Ted Cruz has suggested that Kurdish pesh merga are all we need: “We need boots on the ground, but they don’t necessarily need to be American boots. The Kurds are our boots on the ground.” Cruz has generally dodged specific questions about sending in American troops, instead supporting an “overwhelming” American air campaign.

From the debate: Cruz declined to address ISIS during the debate.

And just for comparison, here is Hillary Clinton on her website:

ISIS and the foreign terrorist fighters it recruits pose a serious threat to America and our allies. We will confront and defeat them in a way that builds greater stability across the region, without miring our troops in another misguided ground war. Hillary will empower our partners to defeat terrorism and the ideologies that drive it, including through our ongoing partnership to build Iraqi military and governing capacity, our commitment to Afghanistan’s democracy and security, and by supporting efforts to restore stability to Libya and Yemen.

So Hillary is a little bit more categorical about not using American ground troops, but basically she’d fit in just fine on the Republican stage. She supports an air campaign; she supports a no-fly zone in Syria; she supports arming the anti-Assad rebels; and she supports partnerships with our allies. If the Republican candidates are any tougher on ISIS than Hillary, they’ve been oddly timid about saying so.